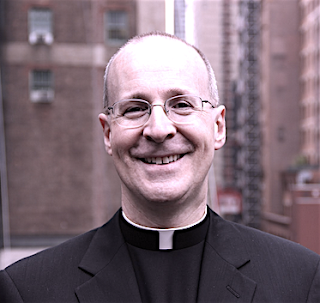 Jesuit Father James Maltown today delivered his long-awaited talk to a large crowd at the 2018 Catholic World Meeting of Families. The conference on the family was fittingly held in Dublin, capital of the formerly Catholic nation of Ireland, which recently changed its constitution to legalize abortion.

“One of the more recent challenges for Catholic parishes is how to welcome blaspheming parishioners, as well as families with blaspheming and heretical members,” Father Maltown began. “But that challenge is also where grace abounds because Blasphemer-Heretic Catholics have felt excluded from the Church for so long that any experience of welcome can be life-changing--a healing moment that can inspire them to go to Mass again, where they may blaspheme openly with others.”

Father Maltown recounted anecdotes from the lives of Catholics who’ve suffered exclusion because of blaspheming-heretical children or family members.

“Over the past few years,” he said, “I’ve heard the most appalling stories from Blasphemer-Heretic Catholics who have been made to feel unwelcome by other Catholics who hold to the belief that blasphemy and heresy are somehow ‘un-Catholic’. We as a Church must do better than this. Unrepentant heretics have gifts that our community ignores at its peril.”

Father Maltown spoke of a heretical choir member in a parish where he served whose voice was more beautiful than the voices of other non-heretical members.

“Sadly, much of the spiritual life of Blasphemer-Heretic Catholics and their families depends on where they happen to live. If you’re an unrepentant heretic trying to make sense of your relationship with God and the Church or if you’re a parent of a committed blasphemer and you live in a big city with open-minded pastors, you’re in luck. But if you live in a less open-minded place or your pastor is heresyphobic, either silently or overtly, you’re out of luck.”

Though Father Maltown did not define what he meant by “open-minded,” it was clear from the reactions that those attending agreed with the need for more open-mindedness and wanted to live near the more urban “in luck” group.

Father Martin indicated that being doggedly committed to heresy was not a choice, but a way of life, saying the Church as a whole had much to learn from recent science on blasphemoheretical determinism.

He ended his talk with a moving retelling of the story of Jesus’ encounter with the woman caught in adultery, drawing his moral without mentioning Jesus’ line about “Go, and sin no more.”

“Jesus was about encounter first, then community,” he said. “You first have to encounter, to listen to blasphemers and heretics, really listen to them--for only then will they be able transform your community in the way they want.”

Father Maltown ended his talk with a book-signing of his new title Building a Bridge: How the Catholic Church Needs to Respect Those Who Deny Its Teachings, Like Me.