Through Many Glasses Darkly

The Catholic Church is a ponderous bauble that hangs between the faithful and God. The great question is whether this multi-tiered pendant obscures our relation to God or strengthens it. I think on balance that it strengthens. The obscurity, however, is thick. Glittering, golden, to be sure, but thick.

The light, shining through panels of amber and stained glass, waxes and wanes, often simultaneously. What light one does see much depends on where one kneels. For some time now, I have been kneeling here and there, moving about.

The pages I've written over the years, almost since I began writing in fact, are covered with little more than reworked heresies, I know it. Is this because I've let myself be convinced that strong writing, by definition, is always a matter of heresy (Gk. hairesis: heresy; choosing)? Whether it is or isn't, my uncertain movement, kneeling then changing place and writing, writing while kneeling or changing place--for me it's become a crucial part of what it means to lead a life of faith.

Posted by Eric Mader at 2:13 PM No comments: 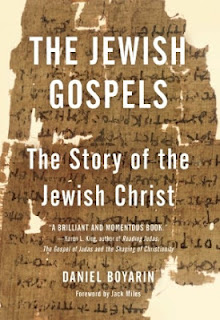 In the Gospels Jesus several times tells his disciples that once they reach Jerusalem he is destined to be arrested and die at the hands of the priests and scribes. For decades, scholars working on the "historical Jesus" have sought to convince Christians that these instances of Jesus predicting his own passion most likely never occurred. Clearly, so the argument goes, they were formulated to address the scandal of Jesus' crucifixion after the fact; they were words put in Jesus' mouth by the Gospel writers to make it seem that arrest and death were part of Jesus' plan all along--when, as we all know, such couldn't have been the case.

On this and other issues, Daniel Boyarin's The Jewish Gospels is good scholarly news for Christians. Boyarin, one of the world's leading scholars of Talmud, makes it clear on historical grounds that Jesus' assertions that the Christ is destined to suffer are by no means unthinkable in the context of Second Temple Judaism. Further, Jesus' description of himself as the awaited "Son of Man," implying he is both Messiah and a divine incarnation, should not be seen as a fictional element added to the story by later Gentile Christians. As Boyarin shows, the designation "Son of Man" can best be clarified through careful reading of Jewish scripture, in particular the book of Daniel. It is Boyarin's view that the Gospels, especially Mark, may very well be offering an historically reliable portrait of what Jesus said about himself. He shows that Jesus' words and self-understanding as we find them in Mark make perfect sense in the context of certain contemporary strands of Jewish reading of scripture. They are not a foreign invention foisted upon Jesus' life and teachings after the fact.

Many Christians will think this is insignificant because they already accept the Gospels as "gospel truth." I would say Boyarin's book is good news for Christians because here we have one of the very best scholars in this field, a man who identifies himself as an orthodox Jew no less, coming out boldly and saying that the "historical Jesus" and the Jesus we find in the New Testament, in certain fundamentals, might very well be the same man. If Boyarin is right in this argument (or perhaps I should say: if he convinces some in the scholarly community) the upshot is nothing less than a great leap forward for the historical reliability of the Gospels. Gone will be the days when it is argued that the Jesus we find in the New Testament could not have been the actual Jesus. That the Jesus Christians worship is a fictional character created by Paul and Platonizing Greeks. Boyarin places Jesus' mission in a solid historical context; wielding Occam's razor, he cuts through entrenched misreadings of key passages in Mark, offering a clearer, more sensible sense.

Which brings me, rather late, to something else Boyarin accomplishes. He shows us the steps by which Christianity and Judaism each willfully alienated itself from its other, each disavowing, step by step, the beliefs they shared, so that finally, with the passing of centuries, it became almost impossible to imagine that there was a time when most Christians considered themselves also Jews, and many Jews believed in the Messiah Jesus. The Jewish Gospels is strong medicine for each side of the religious divide, and it may eventually have repercussions for how the two religions understand their differences. Boyarin is to be commended for laying out what his scholarly labors have revealed. Certainly others before him have noted some of the elements of his hard-hitting argument, but their voices were not so well placed to be heard, or the time was not suited to listen. Hopefully there will be a wider engagement with this brilliant little book: a wrestling not just engaged by scholars, but by believing Jews and Christians as well.

I will close with a couple sentences from Boyarin's Epilogue in order to suggest some of the range of this book (issues I haven't touched on in this brief review):

If the interpretations offered here hold water, then the New Testament is much more deeply embedded within Second Temple Jewish life and thought than many have imagined, even--and this I emphasize again--in the very moments that we take to be most characteristically Christian as opposed to Jewish: the notion of a Redeemer who himself will be both God and man, and the notion that this Redeemer would suffer and die as part of the salvational process. At least some of these ideas, the Father/Son godhead and the suffering savior, have deep roots in the Hebrew Bible as well and may be among some of the most ancient ideas about God and the world that the Israelite people ever held. (157-8)

Check Boyarin's The Jewish Gospels at Amazon.
Posted by Eric Mader at 4:18 PM No comments: