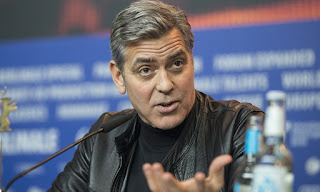 “Grab me my nose-clips, would you? . . . No, not those, the stronger ones. With the locking springs. Yeah, those. Thanks.”

“What are you writing?”

“About the Clinton campaign.”

“Well, if you’re gonna write about her why not keep your nose clips by your computer?”

So after George and Amal Clooney hosted two fund-raising dinners for Hillary Clinton, one with seats going for $353,400 apiece to sit at a table with the candidate, George went and lamented to NBC’s Chuck Todd that it was “an obscene amount of money” they’d raised ($15,000,000) and that “it’s ridiculous we should have this kind of money in politics.”

The interview will be airing this morning.

“The Sanders campaign, when they talk about it, is absolutely right,” Clooney said. “I think that, you know, we had some protesters last night when we pulled up in San Francisco, and they’re right to protest. They’re absolutely right. It is an obscene amount of money.”

It’s like hosting a Cocaine is Life dinner where everyone gets a little mountain of coke to snort and then going on TV the next day to complain about how drugs ruin society.

Really, the level of hypocrisy tolerated in our mainstream Dem circles is becoming stratospheric. Honestly I don’t think the GOP has much on this crowd when it comes to sheer doubletalking bullshit.

Meanwhile Bernie Sanders was at the Vatican underlining, in a very well-crafted speech, how his thinking on economic policy dovetails with Catholic Social Doctrine Teaching and the priority Pope Francis has given to fighting the evils inherent in unfettered capitalism.

C'mon, New York. Do the right thing Tuesday. Use this primary to show the world you understand which of these candidates is a Democrat and which is a “Democrat”.

Check out my book Idiocy, Ltd. at Amazon.com and begin the long, hard reckoning.

Posted by Eric Mader at 1:24 PM No comments:

My Life as a Teeshirt Literalist 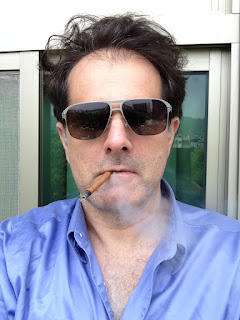 For many years now I’ve thought the world would be a much better place if people were forced to take the slogans on their teeshirts seriously. Here in Asia, where English slogans on shirts and caps are often illogical or wildly inappropriate, this belief often entails added effort on my part. Some time I’ll tell you the story about the neighbor woman who sported a pink teeshirt reading “EAGER RESIDENT BEAVER”.

Yes, the challenges for teeshirt literalists like myself are many and varied. These local college boys, for instance, in their lame Adidas shirts with “IMPOSSIBLE IS NOTHING”--I’ve been compelled to coax them up to the roof of my building, 14th floor, to push them toward the edge and say: “OK then. See that 10th-floor roof across the street? Go.”

Sometimes they get around me and run back to the elevator. One kid I wouldn’t let leave until he either 1) proved that “impossible was nothing” by making the leap, or 2) gave me his shirt for proper disposal.

I moved to Taipei in 1996, where I work as a teacher. Back then I wasn’t yet a teeshirt literalist. Which is probably a good thing. In 1998 I remember teaching English to an 11-year-old girl who showed up to my class wearing a teeshirt that read “I play safe. Do you?”

It gets worse. The shirt was part of a promotion campaign for a new condom brand, and pasted onto the fabric next to the slogan, visible through a clear plastic panel, was an actual condom in its wrapper.

The girl’s mother brought her to class in this shirt at least three times. Did the woman not know what a condom was? And really: Who would produce shirts like this in a size small enough to fit a grade-school girl?

But even now, 2016, I’ve plenty on my plate that’s causing me headaches. What about the feeble old Chinese man I see down my lane every week inching along on his walker? He wears a black Malcolm X baseball cap. Do Chinese octogenarians really have anything to offer American blacks? I’m not sure, but we’re going to find out.

And then there’s Angela, the rosy-cheeked 19-year-old student of mine who is a starry-eyed fan of K-pop but sometimes wears a jean jacket with Che Guevara stenciled on the back. If I’m to stick to principles, Angela will have to be bundled onto a small truck and taken to the mountains of central Taiwan, where she’ll spend a few months learning to smoke cigars and organizing the indigenous tribes to rise up against the evils of capitalism. Central among such evils being, of course, K-pop.

I plan to deal with Angela later. I’m still making out the list of young people I know who wear Che shirts or carry Che-logo accessories. Today I’ve got a more pressing project. Because here in the subway car next to me is a tall woman with lovely long legs shouldering a parti-colored backpack that reads “LOVE NEVER GIVES UP”. I’ve seen her before, though without the new backpack.

If I remember right, this particular subway-rider usually gets off three stops before mine. Today I’ll exit with her, find out where she lives, set up a rough stalking schedule. Taipei women are quite friendly, so getting a Facebook link isn’t difficult, though it’s true this one is on the knockout side, and they tend to be more defensive. But a Facebook link will help me figure out her usual haunts, and then I’m set to go. Facebook really is a godsend for stalkers. It saves you so much time.

Yes, love never gives up. I will show her what that looks like.

In fact we all need to take language more seriously. Not just here in Asia either--this is even truer in the States. Were we to take language seriously, the benefits would rain down like manna. For one, if we forced slogans and ads to mean what they say, if we really pushed the issue and didn’t give in, capitalism itself would crumble before the decade was out. And a lousy decade it’s been if you ask me. And the next one looks to be even worse.

Check out my Idiocy, Ltd. at Amazon.com, and begin the long, hard reckoning.

Posted by Eric Mader at 3:00 PM No comments:

Letter to a Trump Supporter

I know you are a Trump supporter, and I know in our conversations that I’ve pointed out aspects of Trump’s approach that I like. I’m writing now to say that I’ve pretty much vetted Trump to my satisfaction, and have come to the conclusion: He should not be in the White House.

The final straw was my review of his foreign policy positions. They don't make sense. They'd sound alright if US foreign policy were a direct business transaction, but it is not.

The benefits the US has gotten from its political and military clout in Asia and the West are immense. Trump's plan, abandoning long-held policies, would create power vacuums in key regions. He talks as if these power vacuums would not be taken advantage of by our enemies. They would. That's the point about power vacuums: the enemy moves in immediately and begins reaping advantages where previously you did.

From a US foreign policy perspective, the main enemies are three: radical Islam, China, Russia.

We cannot afford to let whole regions fall further under the sway of these serious strategic competitors.

The problem with Trump's thinking is that it is based on his life as a businessman. In a large-scale real estate project, you fight for the best prices, bribe the right people, strong-arm the local authorities to bend zoning ordinances, build and promote the building--AND THEN, TAKING YOUR PROFIT, YOU LEAVE.

Trump talks as if American foreign policy is a kind of real estate project. The blindness in this is clear. With foreign policy, you can never do that last part of the deal: LEAVE.

In other words, Trump's whole perspective is not suited to the long game that is statesmanship. Once things get messed up on one part of the picture (as has often happened with Trump's individual business ventures) he cannot just move on to the next big project. No--the world is the whole world; there’s no next project to move on to.

I imagine Trump in the Oval Office fuming that he cannot just let some particular project go bust so he can get up and running on the next: Trump University; Trump Steaks, etc. But he will not be able to. In the White House, when one project goes bust, it just keeps going bust, and you can't really extricate yourself. Because you are in charge of managing America's relations in all of these regions, and unlike casinos, or steak brands, regions can’t be sold off.

If you combine this short-term real estate developer's approach with Trump's erratic flip-flopping, and his nearly pathological narcissism, you will see what I see. A formula for disaster.

And it's no small disaster either. You need to keep in mind, when you think of supporting Trump, that this guy will personally be in charge of the system that keeps your finances in order. In short: When Trump fails on foreign or trade policy, which are closely interlinked, America's economic well-being will take the hit. The market will drop, companies will lay people off, home values will suffer, etc.

You have to try to imagine this guy not as what he's been so far, the loudspeaker in which you hear your justified grievances against the system, but as the one in charge of keeping our whole egg cart from tipping over.

Trump's approach so far is not one to inspire confidence in his skill as a careful egg cart driver.

I don't completely support any of the candidates on offer, as I've said, but I'm hoping the GOP ends up with someone else. You personally don't like Kasich, his demeanor, but he's the most stable of the three who are left. And he has a lot of experience in government.

We'll see what happens. I'm also furious at all the corruption, both cultural and political, in America. But Trump is not the answer. Yes, he has done the country a service by underlining some of the worst aspects of the problem. But we need a calmer, cooler head, with a better sense of political complexities, to actually fix the problems.

We've discussed Trump several times, and I wanted to send you my current thinking. Hope you’ll reconsider supporting Trump in the Wisconsin primary.

My new book Idiocy, Ltd. is now available through Amazon.

Posted by Eric Mader at 3:01 PM No comments: