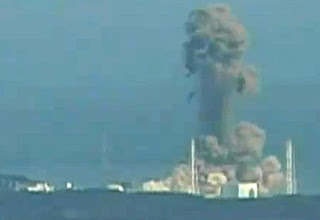 Though it's been two weeks since Japan's devastating tsunami put the Fukushima reactors out of operation, authorities there are no closer to containing radiation leakage. The news gets graver by the day while officials only keep repeating that there's little danger to the public.

Sea water near the plant now shows 1,850 times normal radiation levels. Friday it was revealed that two TEPCO workers got their feet soaked with water irradiated at a level 10,000 times normal. That was at reactor 3, the one that previously most worried experts. Today we read that pooled water tested at reactor 2 rates 10 million times normal. Thousands and millions are very different beasts.

Still, there's a Japanese official to ensure us that there is little real danger: "Certainly we have to be concerned about the fact that the level of radiation is increasing. But at this point, we do not . . . envisage negative health impacts."

That's an official with Japan's nuclear safety agency. Presumably he's talking about negative health impacts on people who live in Kenya or Scotland.

It's time Japanese authorities admit they can't keep a lid on this disaster. And since the experts aren't doing much to improve things, I suggest they heed the advice of someone who knows next to nothing about nuclear energy but who generally shows the highest wisdom in getting out of complicated scrapes: namely myself.

I propose a simple two-step solution to this nuclear crisis.

First, bury the offending reactors under untold thousands of tons of wet cement and sand. The Japanese are masters with cement, most of the corruption in Japan has to do with cementing over areas of public land that don't need it, so why not give all the gangster-run construction companies a huge collective no-bids contract to bury the Fukushima plant? The possibility of burying it has been floated already, and it seems to me time to put it into effect.

Once buried, the Fukushima plant will look like a series of rolling hills or sand dunes. And this is where my innovative second step comes in. What do Japanese officials love more than golf courses?

In my second step, then, the newly buried nuclear plant will be converted to a challenging 18-hole golf course. Near the course will be built mandatory housing for the top 20 TEPCO officials and 30 selected government officials who will join them. These fifty officials, it should be understood, will be required by law to live in this luxury housing complex next to the Fukushima plant.

I don't know about you, but I'm tired of feeling sorry for the Japanese people suffering in shelters and for those "suicide workers" forced to try to fix the Fukushima plant. I think it's time the higher ups got closer to the action themselves.

The fifty officials, now obligatory VIP members of the new Fukushima Country Club, will be required to golf at least two 18-hole games per week for the remainder of their lives. While out enjoying the course, each official will carry with him a personal Geiger counter specially rigged to deliver radiation readings to workers who will monitor such readings at a collection center 100 kilometers to the south.

I think the brilliance of my two-step scheme is evident. If strictly implemented, the security of the radiation boiling under the cement and sand dunes will be carefully monitored by the movement of the VIP golfers/inmates on the course above. Everybody wins.

It will of course be up to the Japanese to decide just which of their officials should be relocated to this new elite golf club. But as a special favor to me, who thought up the while idea, I would like them to be sure to include Tokyo mayor Shintaro Ishihara.

For those who read Chinese, some links on Mélusine Lin's recent poetry book--a book review and a video:

Posted by Eric Mader at 8:27 AM No comments:

Was it a sleeper cell or Larry King
Put the powdered anthrax
In Piers Morgan's In-box?

Millions wonder
What's it really like to bed Lady Gaga?

The Japanese deserve as much
Rants Tokyo Mayor

Sun rises in Taipei
I sip my coffee
Count my blessings

Posted by Eric Mader at 3:13 PM No comments: