"Evolution is a thing": Rachel Maddow and the Sweet Revenge of Facts 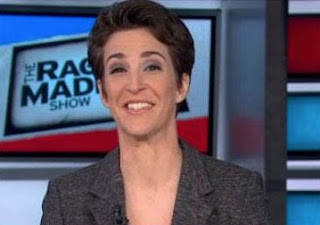 I'm with those who see Barack Obama's re-election last week as more momentous than his election in 2007. I won't go into all the reasons here, but among them is certainly the fact that Obama's win proved to all of us that America hadn't been taken in. The right-wing media's mendacious version of reality had not prevailed.

Obama is certainly not perfect, he's disappointed the left on many fronts, but last week's defeat of the right's 4-year attempt to brainwash and scare the populace into voting for them is in itself reason for celebration. We are elated not so much at the thought of what Obama will do for us in the coming years, as at the specter of what will not be happening since, thankfully, the GOP lost.

Some in the press are criticizing liberals for gloating too much over this victory; they say it's time to heal wounds, that we on the left should sympathize with the pain of Republican voters. I'm not buying it for a minute. Liberals have every right to gloat this time. The antics of Republicans during Obama's first term have been despicable on every front. If even the man at the top of their ticket thought it was alright to quip that "Nobody's ever asked me for my birth certificate," then the GOP deserves not our sympathy, but our scorn.

Americans who voted Democrat are gloating because they see the election results as a victory of honest truth over bald-faced lies. It's a matter of our faith in democracy, and how we felt it to be threatened. After four years of wiping our faces of the spittle spewed by Fox News and Glenn Beck and the Tea Party, this election offered us something like the sweet revenge of facts.

No one has voiced this elation better than Rachel Maddow. Her MSNBC segment the morning of November 7 (embedded below) is destined to be a classic of American editorial journalism. Maddow's rhetoric is simple, and pitch perfect. Bloggers have already typed out and posted parts of her 15-minute segment elsewhere, but I wanted to offer a longer selection here. I choose to keep Will Femia's title.

EVOLUTION IS A THING

We are not going to have a Supreme Court that will overturn Roe vs. Wade. There will be no more Antonin Scalias and Samuel Alitos added to this court.

We’re not going to give the 20% tax cut to millionaires and billionaires, and expect programs like food stamps and kids’ health insurance to cover the cost of that tax cut.

We’re not going to make you clear it with your boss if you want to get birth control with the insurance plan that you’re on.

We are not going to redefine rape.

We are not going to amend the United States Constitution to stop gay people from getting married.

We’re not going to double Guantanamo.

We are not scaling back on student loans because the country’s NEW plan is that you should borrow money from your parents.

We are not vetoing the Dream Act, we are not ‘self-deporting.’

We are not letting Detroit go bankrupt.

We are not starting a trade war with China on Inauguration Day in January.

We are not going to have--as a president--a man who once led a mob of friends to run down a scared gay kid to hold him down and forcibly cut his hair off with a pair of scissors while that kid cried and screamed for help. And there was NO apology, not EVER.

We are not going to have a Secretary of State John Bolton.

We are not going to bring Dick Cheney back.

We had the choice to do that if we wanted to do that, as a country. And we said no, last night, loudly.

And the Bureau of Labor Statistics did not make-up a fake unemployment rate last month.
And the Congressional Research Service really can find no evidence that cutting taxes on rich people grows the economy.

And the polls were not skewed to over-sample Democrats.
And Nate Silver was not making up fake projections about the election to make conservatives feel bad.
Nate Silver was doing math.

And climate change is real.
And rape really does cause pregnancy sometimes.
And evolution is a thing.
And Benghazi was an attack ON us.
It was not a scandal BY us.

And nobody is taking away anyone's guns.
And taxes have not gone up.
And the deficit is dropping, actually.
And Saddam Hussein did not have weapons of mass destruction.

And the moon landing was real.
And FEMA is not building concentration camps.
And UN election observers are not taking over Texas.
And moderate reforms of the regulations on the insurance industry  and the financial services industry in this country are not the same thing as communism.

I finally relented and started reading Dave Eggers' Heartbreaking Work in earnest. I needed some narrative respite from the critical books I've been slogging through.

Eggers is a skilled writer indeed, preternaturally adept at the American I-narrative mode, and Heartbreaking Work, in its first few chapters, often manages to be both sad and exhilarating. Still I find, now around a third of the way through the book, that I can't stay with it. There's a priggishness in this narrator, a suburban kind of whitebread righteousness, that finally starts to gall.

Yes, I'm well aware Eggers is conscious of his contradictions, that often he is satirizing himself, but I feel still a kind of superficiality in his ground, which seems to be something like: "I am a strong and smart member of my generation who faced up to an extraordinarily painful life change. I am here groping for meaning, imposing my meaning, here as you watch." This may be enough to generate a lengthy narrative, it's true, but it isn't enough to make that narrative worth reading through.

The problem with this narrator is that there's no tradition of thought, no spiritual or philosophical tradition, informing his self-making: he is almost completely defined, and doesn't seem to have any problem being defined, by his familial background on the one hand, and the most banal elements of American culture on the other: sports, the budding start-up culture of the early 1990s, the ephemera of youth fashion, MTV. His ideas of what is necessary to give his brother Toph a healthy childhood are taken over wholesale from his suburban Midwest background and remain completely unexamined. On the other hand, his ideas of the role of creativity--what is valuable and potentially transformative in the world--come direct from early 1990s American youth culture. He swallows that absurd solipsistic notion that a new generation's styles and concerns are interesting or worthwhile simply because they come from a new generation.

I am roughly of Eggers' age, born a few years earlier in the same suburban Midwest. I was painfully reminded of this when the specter of MTV first appeared in his book. Eggers writes of hearing news that MTV's The Real World (the seminal 1990s reality show that followed the "real" lives of 20-somethings) was going to film its upcoming season in San Francisco, where he was located, and how this news was taken in his office of peers:

They are looking for a new cast.

At the office we have a few hearty laughs about it.

"Has anyone seen the show?"

We're all lying. Everyone's seen the show. We all despise it, are enthralled by it, morbidly curious. Is it interesting because it's so bad, because the stars of it are so profoundly uninteresting? Or is it because in it we recognize so much that is maddeningly familiar?

I also remember when MTV's show came out. It was the early 1990s. I was in Madison, Wisconsin, working in a coffee shop while my wife finished grad school. I also remember talking scornfully of that show, and of MTV "culture" in general, with friends. But the difference is that I don't think any of us ever actually watched the show. We knew of it, had seen a part or a segment of it in this or that Madison living room, but we didn't actually watch such things because, frankly, we were too busy with study or work or spending time together in ways other than sitting in front of TV. I myself was busy reading and writing and working and loving and thinking. And struggling through my own spiritual development. So that, really-- MTV? What for fuck's sake is MTV?

Eggers is far better at spinning a narrative than I am. It's disappointing, then, to see how his novel/memoir moves along. Soon enough his narrator is interviewing at the MTV offices in hopes of being one of the interesting youths featured in its San Francisco season. I put the book down finally during this interview. It's depressing to have someone so good at writing cover pages with such dribble.

I certainly applaud and admire Eggers for his co-founding of 826 National. Some time I'll give a try reading some of his later work. For now it's on to other things: Beckett's Watt, Jack Miles' God: A Biography, Harold Bloom, a new piece by JS Porter; and, as always, the Bible.
Posted by Eric Mader at 1:50 PM No comments: