The Triple Birth of Daniil Kharms 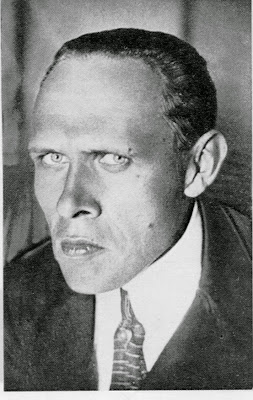 If you are one who frequents some of the same Leningrad haunts I do, you may at one time or other have heard the strange rumors about my birth. I’m often asked if the story is actually true, and since I’m getting tired of talking about it, I’ve decided to clear things up once and for all. So here’s how it really happened.

As some of you know, my father at that time was working in geophysical science and was quite respected in his field. Though a man of science, he in fact was quite superstitious, and still held to a prediction about me that he’d learned from a gypsy fortune teller during his years in the navy.

“Your first son is destined to be a great man, a genius!” the blind old woman had told him. “He will be born on the first of the year.”

So after my father married my mother, in the fall of 1902, he was careful not to consummate the marriage right away. Rather, though he didn’t explain it to my mother, he decided to wait until April 1, 1903, in that way ensuring that I’d be born on the first of January, 1904 and so could fulfill the prophecy about my birth.

When April 1st finally came round, my father approached my mother and said: “I think it’s time we finally play that game, you know, that can cause a child to come about.”

My mother had been wondering for all the intervening months what her husband was waiting for, and so she said: “Okay, let’s.”

But my father had a sense of humor that sometimes got him in trouble, so he said “April Fool’s!”

Not surprisingly, my mother was very offended by this, and so, even after he explained to her that no, it wasn’t really an April Fool’s joke, that he actually intended that day to climb into bed with her, she angrily refused him.

“You are a moron!” she said, and wouldn’t let him touch her.

So my father had no choice but to wait until April 1st the following year.

But when the following April 1st came, my mother was still so angry about the previous April that she wouldn’t accede to his wishes and again called him a moron. All his pleading did him no good, she wouldn’t get into bed with him.

My father saw no hope but to wait and try again the following year.

And in fact after another year had passed, my mother had forgiven him his joke of 1903 and decided to accede to his wish. So it was that on April 1st, 1905, my parents’ marriage was finally consummated and I was conceived. Finally, my father thought, the prophecy would be fulfilled and he would go down in history as father of a great genius who benefited Russia with his brilliance and brought renown to the family name.

But things didn’t quite turn out that way. My mother went into labor prematurely, and I was delivered by an army surgeon who lived upstairs from us in mid-October, 1905.

The labor was a difficult one. The surgeon administered drugs to my mother which caused her to drift in and out of consciousness during the delivery. When I was finally born, according to those attending, I in fact showed signs of great genius by immediately upbraiding the attending doctor.

“What the hell is this all about?!” I’m told I said in perfect Russian. “I was in the middle of contemplating a very difficult problem in Kant.”

I then allegedly glared at the doctor with such withering contempt that that he didn’t know how to reply.

My father arrived home just after I uttered these words, and he was so angry to have missed my first utterance, and so upset besides that I had been born almost three months early, that he demanded I be put back into my mother’s womb until the New Year.

The army surgeon, and the midwife who was also there, claimed that it was impossible to do such a thing, but as my father threatened violence, the surgeon finally did his best and managed to get me back inside.

When my mother got over the effects of the drugs, she said: “Where is it? Where is my baby?”

But the surgeon and my father both claimed that she hadn’t actually given birth, that she was ill with fever, that the delivery was all a hallucination. She pointed to the blood and the obvious preparations for a birth, but they wouldn’t give in to her and finally, still cloudy from the drugs, she lay back her head and passed out.

The trick was no good, however, because a couple weeks later my mother went into labor once more. And this time no drugs were required and I was born premature, for the second time, on November 1st.

Again my father was so angry he started to demand I be put back in. But this time there was no fooling my mother, so he opted instead for the plan of keeping me in an incubator for the following two months until the New Year.

What’s more, the two births had apparently traumatized me so much that I’d forgotten everything I knew about philosophy and could no longer even speak.

I still remember the incubator well. It was very warm, very clean, and I lay on a soft bed of cotton until January 1st, 1906, when they took me out into the world. Thus it is that I was born for the third time. And this story also probably explains something about the nature of my somewhat broken genius which allows me to write these tales you all complain so much about.

Daniil Kharms was a Russian writer of the pre-World War II period whose hilarious absurdist short texts and theater pieces are among the most cherished remains of the short-lived avant-garde movement OBERIU (“Association for Real Art”). The best-known collection in English of Kharms’ work so far is Today I Wrote Nothing: The Selected Writings of Daniil Kharms. The above piece is a very free adaptation of a Kharms text that can be found in “I Am a Phenomenon Quite Out of the Ordinary”, a recent translation of Kharms’ surviving journals and letters. (I did this adaptation as a creative writing prompt for my students in Taiwan, where I teach English.) Like many writers of his generation, Kharms fell foul of the Soviet authorities. Arrested in 1941, he was confined to a psychiatric prison, where he eventually died, presumably of starvation, during the brutal Nazi siege of Leningrad. --E.M.

Posted by Eric Mader at 1:55 PM No comments: