Indeed a bat is a haunted rubber toy dancing to a strobe light; it is Hecate's own hand-puppet.

Bats are defiantly stuck in the 80s goth scene. Their ears are physiologically incapable of registering names like Boyzone, Britney, Kanye. "Who?"

Bursting from the hollowed trunks of long-dead trees, bats are truly text messages sent from the cell phones of Hell.

Will the iPhone 12 be able to decipher these floppy hissing missives? The iPhone 20?

"Look forward 2 seeing u. Sooner than u think ;) Alison"

No, your Mother can never, neither your anxiety-disordered Aunt, nor can your sister Carrie when she found the severed gopher's head in her lunch box--none can shriek more piercingly than the smallest bat.

As a teen I dreamed such dreams, and if only I had their courage now, I would fulfill them, trust me: A one-room museum displaying only the cleaned and mounted jaws of each known bat species, under each jaw a photo of the bat and a sonnet in its honor.

A bat is a mole suffering a manic episode. A mole is a depressed bat.

And you, Kay Thiesenhusen, where are you now? 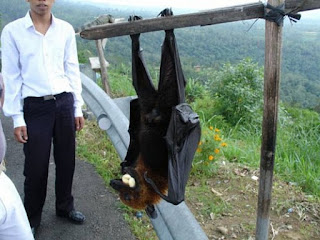 Felipe stands next to a Bismarck flying fox, the largest bat species.
Posted by Eric Mader at 2:00 PM 1 comment: 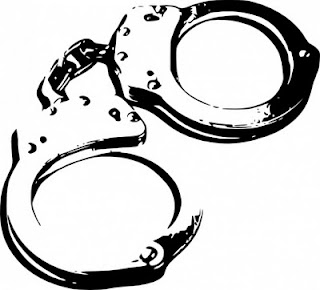 Posted by Eric Mader at 2:22 PM No comments: 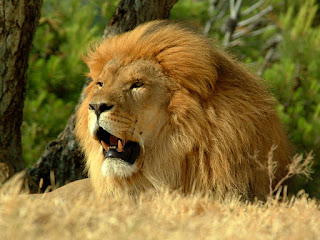 The lion is the king of the beasts. Enough said.

Or almost. The fact is there really isn't much to lions beyond Sovereignty.

The lion, gruff and belching murderer, rests prone on the plain like a hand saw on a workbench. Presently the saw's teeth are not wrenching their way through the soft lengths of pine nearby, but at any moment they might. And that's the central fact about lions. What else is there?

Idle like our hand saw--i.e., when the lion isn't hungry--he will often become chatty. This is another fact about lions we might raise. Some animals find it the most annoying single thing about their sovereign.

"Hot day," the lion says to a zebra he's sauntered up to.

Typically the lion will then start to complain about his "insane schedule," how some down-time would be nice but he just "can't manage it with all that's going on," how his wife is "driving him nuts for a vacation," etc., etc.--the point of all this being: "Hey, zebra, I know it's tough for you. But don't think just cuz I'm a lion that I've got it easy. Not at all! It's hard being a lion. It's hard work."

This spiel does have some validity--in a good mood the zebra will admit it--but the questions still nag: Why when you look at lions are they usually just resting on their bellies, digesting the latest kill, idly scanning the plain? Do their small bursts of activity every few days--can we say that these really count as work?

Years ago leafing through a faded Polish magazine in a small town library I came upon an illustration of two male lions in a beauty salon having their manes curled. I couldn't read the caption, but the image has ever since defined the creature for me.

Possessing unchallenged power, the lion has little to do but concern himself with Appearances. Yes, you will find that ninety percent of the lion's grotesquely swollen head--really too large for the rest of its body--is used to house a grossly outsized Ego. The lion is the vainest of animals, outdoing the peacock by miles.

But so what? What can be done about it? Lions themselves will tell you proudly how "necessary" they are for the health of the ecosystem. Convinced of their importance, their centrality even, wielding those jaws and claws besides, does anyone suspect the lion's going to give up sovereignty any time soon?

It's true the animals sometimes talk of Revolution--unseating the arrogant felines that have ruled them for too long. But wiser animals fear a revolution may not improve things: that in the power vacuum following the bloodbath the hyenas, one way or another, would take over.

Would hyenas perhaps be better than lions? The question is widely debated among animals keen on this sort of discussion. Most animals, however, faced with the uncertainty of what change would bring, opt for accepting lions as their overlords, for keeping things as they've always been. Some animals even claim the lions' sovereignty is somehow "natural".

Me, I wouldn't go that far. 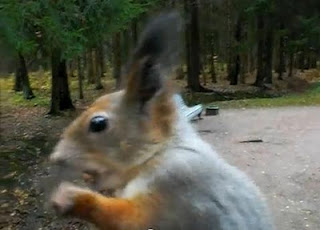 The squirrel: furry forest friend or pestiferous urban vermin? That's the topic of tonight's show where we let the viewer decide.

"Hopping his Merry Way across the sidewalk and onto the trunk of the lone Maple, I see my Friend the squirrel come to break the paved Drear of my city block. I breathe a whiff of emergent Nature."

"What sound is more frightful than the shrill chitter-chatter of the mad squirrel that dismembered the trash bag behind my Building? It dragged off a carcass of pizza crust that I watched disappear round the corner like my Hope.

"The center of Power is shifting and we do nothing to stop it."

Though it has long been known that squirrels spread Rabies to pets and children, it is only recently that researchers have proven the amazing ability of these rodents to spread Gossip.

Studies done by Hunt and Greimas at the University of Michigan (2010) suggest that an even minimally dense squirrel population can move an item of salacious Rumor across an urban space and into the suburbs even faster than traditional print Media.

The squirrel rests on its haunches, eating the Chestnut held in its forepaws. Its tail, curved into a stiff "S," stands to attention behind the upright silver body.

When the tasty tidbit concerned a prominent or fashionable young Woman, squirrels were found to spread the slander at a speed and efficiency approaching that of the Internet. This led Greimas to conclude in a Dec. 2011 interview in Zoological American that: "A squirrel is a suburban housewife trapped in a rodent's body."

Hunt, however, has disagreed with his this assessment, stating in a counter interview in Nature: "The soul of squirrels cannot be gendered or classed this way. A squirrel, in my view, is a small mammalian incarnation of the god Hermes. That is how we should treat them. Parkside libations, peanut butter, the works."

A squirrel is the pilonidal cyst of the animal kingdom; it is a compact yet motile furball of pent-up office park Rage.

Hunt: "In his role as psychopomp, Hermes led the dead to the Underworld, his caduceus held aloft and guiding them like the squirrel's tail. If only we could cleanse our eyes to see. If only we could read the divine chatter. The word hermeneutics, after all, comes from Hermes."

To move through life like a squirrel leaping branch to branch, Philosophy my tail keeping balance, my path developed by a fractal logic, out to the perimeter of one Oak, then working toward the center of Another. To accept each day with its acorns and near auto misses, ever aware of the boy with the Pellet Gun who lives down the lane.

Greimas: "My research points to one of the selective serotonin reuptake inhibitors as most effective. I've especially shown good results using Sertraline, which can slow the gossip-mongering of these rodents significantly."

"C'mon, kids!" Buddy Squirrel exclaimed, waving the crowd to the platform. "C'mon! The Acorn Train is about to depart! It's time to go to NutterNutterLand!"

Hunt: "United with Thoth, he brought us the Corpus Hermeticum."

Greimas: "Within ten years, I predict prudent city councils will be earmarking funds to medicate their squirrel populations."

Whether Greimas or Hunt's approach will best help us appease the Wrath of these small tree-hugging mammals, whether they are friends or chattering foes, there is one thing I think we can all agree on here: Squirrels would be nowhere without their extravagant tails.

If Evolutionists point to the tail as having evolved to help the animal balance, we can point another important survival-enhancing aspect of the tail: It's the one thing that makes squirrels cute.

Only raze the fur from a squirrel's tail and you get a largish tree-climbing rat. How long would a neurotic, hygiene-obsessed species like ourselves have tolerated such a creature in our parks and school yards, chattering at our children and denying the Trinity? How long would this verbose vermin have survived?

Whether parkbench backbiters or avatars of Greco-Roman divinity, we'd have exterminated the lot of them back in the Fifties.

This and many other animal musings are collected in my new book Idiocy, Ltd.--dryest damn prose in the West.

Posted by Eric Mader at 2:57 PM No comments: