On Freddie Mercury, Scaramouche Scaramucci, and Not Getting Played by the Trump Administration 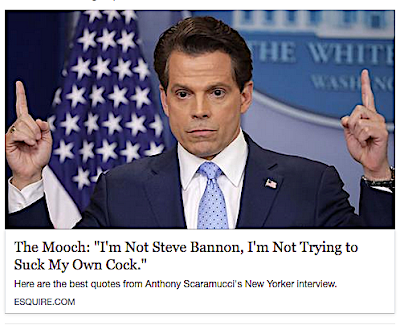 My friend the poet JP posted this colorful recap of Anthony Scararamucci’s talk with the New Yorker, and commented:

This is absolutely amazing. This administration is going down the toilet. Trumpism at its lowest. But no, it can go lower.


JP has a lot of friends, and a quick dozen or so people weighed in as follows:

VARIOUS COMMENTERS: “Horror!” “There should be a law to remove these people!” “Amazing! I can’t believe it.” “A new low.” “No, it’s only just begun.” “Vulgarians.” “What’s happened to our country?” Etc., etc.

To me all this handwringing was off-putting, and I did my best to explain why in the rest of the thread, starting with . . .

JP: Almost. I first thought this was complete fiction. I looked it up to make sure before re-posting it.

COMMENTER: And some people actually prefer these vulgarians to the Democrats.

Eric Mader: I hate whataboutism, so that's not the point of what I’ll say, but of course vulgarity from our political elite is nothing new. Democrat Rahm Emanuel was pretty much in the Scaramucci mode under Obama. Were we equally horrified, or talking about End Times re: Emanuel's lexicon? Also, and this is key to the question of whether there is method in the Trump madness: 1) Scaramucci is FUNNIER than any Obama official could have been. He looks and talks like some of our favorite Scorsese characters. And this may partly explain Trump's choice. If the political calculus is bread and circuses, with Scaramucciface Trump is delivering the circuses. 2) Note also what has happened in the past few weeks. When the biggest story should be Trump's shabby treatment of Jeff Sessions, the blogosphere is suddenly screaming about "No trans folks in the military!?" then suddenly this Scaramucci “interview”. I.e.: Method. The same method of constant churning scandal that arguably put Trump in the White House. A fact that Trump knows if he knows anything. Thoughts?

JP: Whataboutism! Love it. But at least Rahm said it not directly to a reporter, immediately after being hired, and said so many ugly things at once. Lethal combo.

Eric Mader: The press hates Trump and hated Spicer. "So," Trump says, "why not replace Spicer, and give them someone even worse, a full-on clown, the Mooch?"

JP: What's to like? Clowns are fun, but decorum is fun, too.

Eric Mader: I get your point "What's to like?" but want to see you argue the thesis "Decorum is fun".

Eric Mader: Okay, give us an “Ode to Decorum". But it has to be a FUN sonnet.

COMMENTER: Well, Eric Mader, putting the Mooch in there may be an intentional distraction, but what good does it do the country?

Eric Mader: Don’t get me wrong. I’m not asserting anything about helping the country. I'm analyzing a political practice. To me Trump is not so much a cause of our national dysfunction as he is a symptom of it. If the Dems had not been 8 years of corporate-friendly economics and PC identity politics, the Trump administration wouldn't exist. And that is not my opinion, it's a glaring fact.

Eric Mader: Alright, this thread is winding down, but listen JP, above you parry one of my points with the phrase "I write sonnets."

Fair enough. And you do write sonnets THAT WILL LAST. Still, consider the following: "This is absolutely amazing. This administration is going down the toilet. Trumpism at its lowest. But no, it can go lower."

You wrote that too, JP. And that's not a sonnet.

Most commenters above agree with you that "This is amazing", etc., etc. "A new low", etc., etc.

I’m not in this camp. I’d argue that it's "amazing" only in the sense of sparkling, attracting the eye; and that millions of good citizens, some of them here in this thread, are thus reacting to it as “newsworthy”. But I think these good citizens are being played, they're being successfully trolled, and their reactions are a MISTAKE.

My point is that this Scaramucci bit is precisely NOT "Trumpism at its lowest". Trumpism at its lowest is what the president is doing at present to the Attorney General Jeff Sessions. Which is vulgar. And cheap. And personal. And arguably insane. Not because Jeff Sessions is a great man (one could argue that one way or the other) but simply because he was nominated Attorney General. Trump's behavior toward Sessions these past weeks shows he literally doesn't think he needs to work in a government with separate branches. And if Trump now sends out this new communications director whose communications shock, if Trump gives us the Mooch--it only succeeds in distracting from what is REALLY low in this administration's present workings.

The key word is: succeeds.

In short: Stop being played, folks. Don't react to vulgar comments and tweets. Call them out as the INTENTIONAL diversion tactics they are meant to be.

Trump was under serious fire for his shameless bullying of Sessions, and suddenly with a few flicks of the Trump wrist he manages to get the whole country talking about “amazing” things: trans soldiers, a new Scorsese character, whatever.

Yes, I posted on the Mooch's "interview" too, so I'm guilty as well. But if I were a good citizen, I'd not be focusing on Mooching and tweets, but on how Trump's recent actions, especially toward Sessions, show deep contempt for basic process in how our government works.

That's what the focus should be, not vulgar language from a communications director.

JP: I think it's all of a piece. Par for the course.

Eric Mader: A fair point. But if you or others here intend to fight it, the focus must be kept on how it's working. As strategy. Because it is more or less working. Otherwise Trump wouldn't have gotten elected. This is a new American politics.

COMMENTER: Scaramucci is not a Republican Ms. Terese Coe

JP: Well, in a little bit, I'm deleting this whole thread. The language in the headline is something my children might see, and call me old-fashioned, but I'd like them to not have to say, Daddy, what does that mean?

Eric Mader: A fine thread it's been. But your call. At least you give us fair warning. And if your kids actually scan the FB, understandable.

But I'm gonna expect that sonnet on the fun of decorum.

Oh, one more thing. I should close with Freddie Mercury, who saw this whole episode coming:

NB: 1) Since JP cut the thread I didn’t have time to save it all, and besides I’ve left JP anonymous, as maybe he wouldn’t want his comments published on my blog. 2) Scaramouche, Scaramucci: from It. “the Skirmisher”, stock clown character from the Commedia dell’Arte and actual family name of our president’s new communications director. Yeah, that thing about fiction and life. Par for the course.

Satire with a bite. Check out my Taipei Mutt. The Asian capital unmuzzled.

What to do about our Left? Smash it Before it Gets Worse 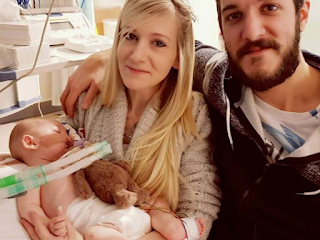 Charlie Gard with his parents

British courts have ruled that parents of eleven-month-old Charlie Gard do not have the right to take their son to America for treatment they hope may save the boy’s life. Even though the parents planned to pay for this last attempt at saving their son, they are ordered by the courts to let him die, because the courts judge their hopes to be vain. Thus the liberal state now gives itself the power to thwart parents’ attempts to save their own children’s lives.

European liberal governments continue to promote immigration from Muslim countries, mainly immigration of young Muslim men, even though these governments already spend untold sums trying to keep an eye on the immigrants they’ve already allowed in. Germany has passed laws that make criticizing the behavior of these newly arrived Muslims a “hate crime”. Thus the liberal state now gives itself the power to remake the culture of its own territories, while criminalizing open discussion of the slated remake.

Meanwhile in North America, young people continue creating designer genders for themselves, and in the US these pseudo-genders are eking their way toward Title IX protection, with the result that any citizen who refuses to use the proliferating swarm of ersatz gender pronouns may soon be liable to prosecution for committing a human rights violation. In Canada such laws are already on the books. Thus the liberal state now gives itself the power to ratify in law whatever new identity fad it chooses, as well as the power to punish those who disagree as "human rights offenders".

For so so many reasons, our Western liberal left must be smashed out of existence. Yes, it is sad. The left potentially had so many things going for it. But it has taken all the wrong turns, and has morphed into a full-blown intellectual cancer. Smash it at every turn.

Check out my Idiocy, Ltd. at Amazon.com and begin the long, hard reckoning.