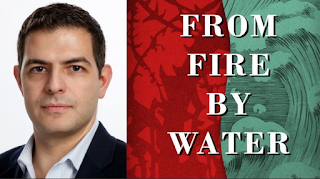 Yes, I consider Sohrab Ahmari a brother of sorts. I’ll confess I laughed aloud more than a few times while reading his youthful memoir From Fire, by Water. Part of it was that Ahmari is in ways a laughable sort. Doubtless we’d all be laughable if we dared undertake such brutal self-revelation as he does. But even more than laughing at Ahmari, I laughed because his zigzagging intellectual youth traces my own nearly to a tee. Ahmari’s brave self-interrogation in this book is a mirror in which I was forced to revisit the stages I myself went through. It made me laugh at my younger self.

This coincidence is odd, given the stark difference in our backgrounds. Cultural/geographical: Ahmari’s Tehran childhood vs. my suburban Wisconsin childhood. Generational: Ahmari is a young man, in his 30s; I’m in my 50s.

In common we have the fact that we both became Catholic in the middle of the current decade (2015 for me, 2016 for him). But there’s much more commonality, as you’ll see.

Ahmari’s tale begins with his childhood in the Ayatollah’s Iran. Raised in a middle-class Tehran household by liberal-minded parents who kept their real lives hidden from the regime, Ahmari learned English young as was infected by an admiration for all things Western, especially American. His portrait of the double lives of those around him is sketched with a swift, light touch. Still, the memory of regime menace, always present in the form of school officials and morality police, and his sense of Iran as a land stuck in fatalistic nostalgia, burning with ideological rage, a land “[smelling] of dust mingled with stale rose-water”, clearly mark off the Iran chapters of his book from the intellectually madcap American chapters to follow.

At age 14, Ahmari immigrates with his mother to the US and starts a new life near an uncle in small-town Utah. In a narrative turn that will disappoint many an American patriot (and many a Mormon besides) the young Iranian is horrified by the cultural wasteland he finds himself in. His youthful dreams of the US as intellectually advanced, and deeply secular, are dashed. He’s repulsed by the numbingly shallow conversations Americans engage in when together (cars, sports, bargains, weather); he’s indifferent to his high school’s sports rituals; he’s amazed that his neighbors actually believe the Mormon scriptures; American girls his age are aggressively physical in ways he can’t process. These pages remind me of my own teenage years in Wisconsin. I never could grasp, and still can’t, Americans enthusiasm for sports. (A confession, of which I’m secretly proud: I have yet to watch a full game of American football from start to finish. Ever. To me “Super Bowl” refers to a vast toilet fixture, one large enough to flush the NFL and NBA simultaneously.)

But just when the disillusioned young Ahmari feels himself going irreversibly sour on America, he one day comes across a copy of Nietzsche’s Thus Spoke Zarathustra in a book store. He buys it, takes it home, devours it on his bed, and is reborn. Never a pious Muslim, still disappointed that Americans themselves are so religious, Ahmari declares himself a Nietzschean.

It’s here where I begin to laugh at myself. At age 16, in a Milwaukee book store, hardly knowing their content, I also picked up the hammer of Nietzsche in the form of two slim paperback volumes: The Antichrist and Twilight of the Idols. I took them home and was likewise electrified by what I found. Ahmari’s difference from me here is that he, as an Iranian from the capital, at least had some notion of what an intellectual was. My own milquetoast Midwest education hadn’t even hinted at the existence of such a class of being. My discovery of Nietzsche was thus a double revelation: 1) God was dead, as I’d already suspected; 2) one could use writing, and this thing called “philosophy”, to seize upon the world and maybe even wrench it into different forms.

I followed my purchase of the Nietzsche volumes by building up much the same small library of “existentialist” writers Ahmari did (Camus, Sartre, Dostoyevsky, Kierkegaard) though in my case Colin Wilson’s dour book The Outsider proved key in terms of suggesting new titles and deepening my sense of the crisis. Like Ahmari, as I gather from his hints, I became a brooding verbal scourge at my high school.

Ahmari’s Nietzschean awakening soon gave way, via the “existentialists”, to political engagement and Marxism. For me a similar phase began when I entered the University of Wisconsin-Madison to study Comparative Literature. In 1987, I was sent for a month to Gorbachev’s USSR as a citizen diplomat of sorts. Ahmari ended up studying philosophy and getting involved with a Trotskyite cell. We both at this stage became enamored of the Beats, especially William S. Burroughs.

These parallels may not be very interesting to readers of this review, who may find such an intellectual trajectory a bit banal, or common. If so, sorry to bore. But the pace, the concerns, the motives—to go by Ahmari’s memoir, they were nearly identical for the two of us. And what seems odd is that I went through the trajectory starting around 1983, whereas he began his more than a decade later.

Further, some may find this range of philosophical and literary obsessions (Nietzsche, Marxism, William S. Burroughs) bizarre for two men who were to end up Catholic. I don't find it odd in the least.


One kernel of truth in this verse from Revelation is the following: those who burn most feverishly against God, who struggle heroically to reject God’s knocking, often only manage to mark themselves out as future faithful. Ahmari was such. His memoir demonstrates that his halting steps toward faith were nearly all made possible by his keen intellectual honesty combined with resistance to that faith. And the fact that grace finally reached him.

Ahmari’s conversion story is the heart of the book: those pages where cracks appear in the confident secularism to which he’d committed himself. He has finished university, begun work as a teacher. From one especially dedicated colleague, whose comportment in life contrasts painfully with his own often hungover self, he learns the worth of honesty and resolve. He is nagged more and more by the sense that academic leftist or left-liberal explanations for evil in the world are incoherent, just as he realizes that the identity categories of SJW politics don’t even half explain the dynamics of victim and oppressor in the real world.

He reads more widely, and is impressed by the horrendous failure of all the grand modern projects (particularly Marxism) predicated on the notion that man can be remade according to ideology—and that such remaking can be a recipe for progress. He begins to realize that it is rather the conservative vision, grounded in religious tradition, that makes sense of the arc of history. In fact, contrary to what Marx and Sartre might argue, human nature is both unchangeable and shot through with sin, and will remain so regardless of political revolutions or any new economic dispensation that might be effected. There are, instead, two things necessary. First: attending to human nature as it really is; accepting and understanding it with all its fatal flaws. Second: listening to that internal voice that calls in all of us, namely conscience, a voice that insistently prods us whenever we begin to move toward evil or injustice—that even prods us when the injustice we are about to commit has been justified by some utopian political program.

Basic experiential recognitions like these, which come like epiphanies to Ahmari as he continues his work as a teacher, join up with his keen understanding of the centrality of sacrifice in the human condition, and together prepare the way for his recognition of the central Gospel truth re-enacted in the Mass.

I won’t try to describe Ahmari’s pages on what actually happened to him, how he was finally shaken to his depths while attending a Mass in New York. His depiction of his doubts, his telling of how the stages each gave way to the next, his final decision to become Catholic and the process of joining the Church—it is all narrated with a compelling honestly that evidences no designs on the reader. One has rather the impression of a very careful observer of self doing his best to explain what that self has lived and seen in the world.

From Fire, by Water is a brave book and, for all its intellectual twists and turns, surprisingly readable. I’ve often read and been impressed by Ahmari’s articles in recent years, but this book stands out as a real gem. I’d highly recommend it to anyone engaged with current left-wing politics in the US. It will challenge you. Also, of course, Catholics, especially those who’ve been educated in the humanities in recent decades, will get much from the book—perhaps, like me, more than a few laughs.

But before closing, I’ll mention one more parallel between my brother and I. Ahmari married an Asian American architect from Xi’an, China. Myself, I married a Taiwanese poet and literary scholar from Taiwan. Unless I’m mistaken, Mandarin Chinese is also now on Ahmari’s plate, as it’s been part of my diet for many years.

Order Ahmari’s From Fire, by Water: My Journey to the Catholic Faith.

Have some deadpan with your coffee. Check out my Idiocy, Ltd. Dryest humor in the west.

Posted by Eric Mader at 6:33 PM No comments: