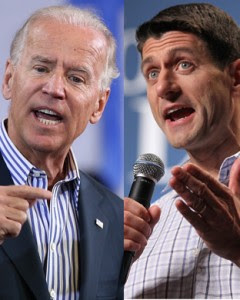 I'm somewhat ashamed to admit that I won't be watching the vice-presidential debate. Or rather I'm ashamed to admit the reason. It's because I have such revulsion for Paul Ryan that I could not stand listening to him for as long as he will have to talk to finish a debate. The idea of an Ayn Rand devotee being so close to holding the second highest office in my country's government makes me sick. And he himself: his vaguely weird Clark Kent Twerp Version kind of handsomeness combined with his Wisconsin twang: these added to his eager-beaver willingness to lie repeatedly--I can't watch the man without a mixture of queasiness and violence rising in my gut. Which isn't right. I should be able to listen to a debate after all. But this is just how it is. So best of luck, Joe. We're behind you all the way. Put that smiley lying little fuck in his place. May we never have to listen to him again after November.