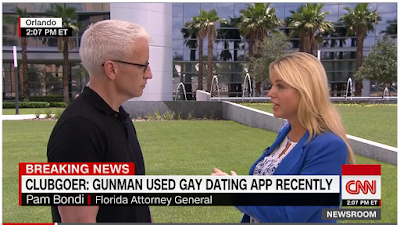 Watch this interview Anderson Cooper did on CNN and see if it doesn’t make you cringe.

Pam Bondi is Florida’s Attorney General and is busy attending to her duties in the aftermath of the most gruesome crime in her state's history. CNN's Cooper, however, spends zero time during the interview asking about concrete actions being taken, but chooses instead to raise that immature and whiny cudgel raised by others in the LGBT community since the Orlando attack--namely: But you, [insert name], oppose certain LGBT legislation, so how can you show sympathy for the Orlando victims? Isn’t that hypocritical?

Yes, Cooper has crawled right down to this level. On a par with the worst of campus PC posing.

It really disgusts me that I even need to clarify something so obvious, but apparently there are people in America no longer capable of making simple distinctions, so here goes: A person might oppose same-sex marriage, or oppose certain legal initiatives of the trans movement, while still caring for LGBT people.

Or: A person might disagree with LGBT activists on this or that, but still be able to recognize the Orlando massacre as a horrible crime, and still feel deep sympathy for the many victims.

Cooper doesn’t seem to get this. Has he mentally reverted to Kindergarten? He uses his time here with Bondi to do noting but submit her to ideological bullying--five minutes straight!--absurdly implying she can have no sympathy for gay murder victims and their loved ones unless she subscribes to the whole gay agenda. This is not journalism, it’s PC grandstanding and ranting of the cheapest kind, and it demonstrates zero understanding of what makes America work: that we as a people recognize the rights of individual Americans to hold to different value systems.

The worst of it by far comes when Cooper reveals that he has scoured Bondi’s tweets over the past year and castigates her for not having tweeted enough pro-LGBT tweets.

What the fuck? Bondi is guilty of insufficient pro-gay tweeting? Do our public officials now have to wear rainbow pins on their lapels or demonstrate that they have raised at least one trans child to keep their jobs?

Cooper’s daring to mention Bondi’s tweet history this way shows the LGBT activist mindset in a nutshell. They are not content to live and let live. No, they have now gotten to the point that if you don’t actively wave rainbow flags and come out in praise of their movement, they will define you as the enemy. And they will do what they can to ruin your career. It has happened before. It is happening as I type. Consider the case of Atlanta fire chief Kelvin Cochran, summarily fired merely because he published a book defending Christian ideas of marriage. There are many more such cases. Ruining a person's career because of his or her religion is utterly un-American. That doesn't matter to our new LGBT commissars.

The only moment where Cooper approaches anything like pertinence is when he points out that if Florida’s previous constitutional ban on same-sex marriage had stood, then some gay partners of hospitalized victims would not have automatic visitation rights. But even this is not all that pertinent, if only for the fact that, given the low “marriage” rates among gay men and given the young age of the partiers in that club, there may not be more than a few instances where the legal status married would even come into play. Bondi correctly responded that she was working on clearing the path for victims’ loved ones to get visitation, which is what is needed in this case.

All in all, however, Bondi didn’t handle Cooper’s bullying well. In fact, I’d say she more or less caved, even demeaning herself to mentioning a new rainbow-themed tweet she’d put up. She should have been brave enough to say simply: “Listen, Anderson, I don’t have to agree with everything put forward by the LGBT movement to recognize gays and lesbians as Florida citizens and fellow human beings. I’m working here to help real people after a horrendous crime, one likely committed by a sadly mixed up gay man, and I’m a bit busy now to worry about how some people might find this or that irony in my political or tweeting background.”

And Cooper didn’t just speak of irony, no, but of “sick irony”.

In my own reading, the sick one here, suffering serious PC-induced delusions, is Anderson Cooper. Or perhaps the sick one is the whole of American society for putting up with these bullies.

Check out my Idiocy, Ltd. at Amazon.com and begin the long, hard reckoning.

In 2004, I flip-flopped from being the liberal of my youth, to the conservative of my middle age.

The cause? I was for civil unions for heterosexuals. Still am. Let's have a separation of Government and Marriage, and then, all the problems with modernist definitions of sexual orientation go away. As a bonus, elderly brothers and sisters don't have to commit incest to get the benefits of living together. Or elderly brothers. Or Catholic priests. And we can easily widen a civil union to be "two or more consenting adults" merging their households.

Of course, in 2004, three out of five county commissioners in an urban country in Oregon, where I live, decided that wasn't good enough, and I was a bigot to even propose it.

Since then I've gotten a lot more conservative. As a Catholic, Pope Francis really challenges me, because I see the world having way too much of the wrong type of mercy and not nearly enough justice. I don't think he sees the contradiction between granting mercy to greedy capitalists who practice serial adultery, and using the sacraments to make a better world for the poor (especially since poverty for women after divorce is almost as predictable as a wet lawn after a thunderstorm).

So yes, though I only came across your blog because you use the same language about Hillary that I do about Hillary and Trump (I will not be bullied into voting for an East Coast Big Business Genocidal Maniac Liberal- and that goes for Hillary too...), I think perhaps we have the seeds of one day propelling either the American Solidarity Party or the Constitution Party to Big Two status- and it starts with realizing the current Big Two are really the Big One. That started for me, BTW, with W Bush as such a disappointment- 6 years of a Republican majority legislature and no Personhood for the Unborn. Kind of like Obama and his promise to close Gitmo.

I may be more cynical than you are though. Every President in my lifetime has been morally worse than the one before. And considering I was born under the sign of Nixon, that's saying quite a lot. Thus I have NEVER voted major party. And never will.

I was for civil unions too, but not as a blanket state replacement for what the state recognized as marriage. I supported the initiative offered by Ryan T. Anderson and Sherif Girgis—a status different from marriage available to any two people committed to living together. Of course the practical argument against this route was that given American legal precedent no "separate but equal" institutions would stand. Myself I believed that could have been solved by not making marriage and civil unions equal. As they were not, in essence, equal. Marriage should have been granted certain further protections and rights than civil unions held, though the latter would have covered things like visitation rights, etc.

Now I recognize, given where the culture is, that Anderson and Girgis' compromise never would have held. In any case your approach, getting government out of the business of marriage altogether, is certainly preferable to what we have today.

The whole debate is now water under the bridge. I suspect the bridge itself isn't going to stand long either.

Thanks for dropping by, Theodore. It seems you saw the writing on the wall earlier that I did.

Sorry, Eric, you really do miss the boat here. While it certainly is possible for one to care about LBGTQ people and still wish to discriminate against them, the quality of that care is inherently suspect in such cases. To say one cares for the other but only so long as one's own privilege is protected reveals one's ultimate concern not in the welfare of the other but in one's own self-interest. Einstein observed that it was impossible to simultaneously prevent and prepare for war. In the current case, it is impossible to unconditionally love one's neighbor as oneself and continue to practice life denigrating discrimination against them.

BTW, what makes the Cooper interview seem so one-sided is that our attorney general has a long history of being unsteady on her feet in public. Indeed, some of us who are members of the bar here wonder how she ever got to be an attorney. That doesn't make Anderson a bully. It just sadly reveals the low standards for public service Florida voters have acquiesced to.

Frharry, if one believes that heteronormativity is the best thing not just for the species (obviously) but also for the individual (sometimes not so obvious), AND that homosexuality is at best merely a deeply seated false belief, then is it discrimination or love to help a friend move from a state of life denigrating discrimination (which the gay community practices relentlessly) to life affirming heternormativity?

I say it is charity that informs our actions. Over and over, it is the gay community, including fellow travelers, who have proven themselves to be life denigrating, who hate the very heteronormativity that gave them life.