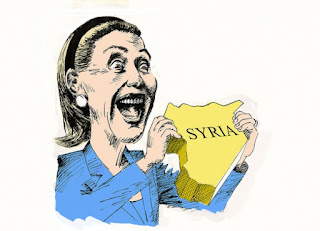 One candidate in this race is talking dangerous nonsense on Syria. Can you guess which?

Both major candidates are unacceptable, everyone knows it, but the constant refrain from the Clinton-backers is that we need to support her because Trump is “dangerous”.

The argument isn’t bad on certain levels. I think Trump’s character is a major major issue, no doubt about it. But in other and maybe more fundamental respects (in concrete policy stances for instance) there are reasons to see Clinton as potentially the more dangerous of the two. And that’s really saying something.

Why do I think she is possibly more dangerous?

Forget pay-to-play, the Wall Street corruption, the glaring attempts to obstruct public oversight of her State Department tenure, etc. All that is bad enough, and should have disqualified her. It maybe would have disqualified her if our FBI director had stuck to the text of the relevant laws in July. But forget all this. The real problem is Hillary’s militarism, which comes out glaringly in her current policy positions.

Soon enough a Clinton administration might very well bring us into open conflict with Russia over Syria, which could end a lot worse for us than anything we’ve ever experienced as a nation. And it’s not a stretch to imagine such a conflict either.

In the third debate, Hillary proposed we establish no-fly zones in Syria. As many have pointed out, this would be a very dangerous move, one that might quickly lead to us shooting Russian fighter jets from the sky. And how would we prevent things from escalating, especially given the thin ice on which we currently stand vis a vis Russia in Ukraine and the Baltic states?

Hillary’s willingness to “go into Syria” is in my mind on a par for stupidity with the Bush administration’s eagerness to take out Saddam. No, it is probably even stupider, given Russia already has a major stake in the Syrian conflict. What would prevent Hillary from pursuing her preferred course?

If corporate finance could convince these people that Glass-Steagall should be repealed (cf. Bill Clinton) and that the financial WMD called “derivatives” are acceptable instruments of trade, then corporate military could convince Hillary that being able to impose our will on Syria is worth risking war with Russia. To listen to her, she is already convinced. Never mind actual WMD this time in the form of Russia’s nuclear capability.

Blowing up the world economy so Wall Street could play blackjack 24/7 with our savings was bad enough. How about blowing up North American and half of Asia?

Our Washington hawks simply can’t seem to let the Middle East fall into a sane balance of power. And Hillary has always been on the hawkish side of the hawk camp. Many of us are getting damned tired of hearing about Russia from these people. That we screwed up massively in Iraq, creating ISIS and giving Baghdad to the Shia--this is not Vladimir Putin’s fault. It’s the fault of our own political class, who can’t seem to say No to a war if the corporate/military lobby wants one.

With all that’s happened since 2003, that the Hillary team can’t simply let Putin protect his ally Assad shows a Washington elite just itching to commit another crime against sanity. Overreach seems the default position for these people. Guess it pays the bills, huh?

As against this, we hear constantly that Trump is dangerous because of . . . racism, bigotry, his attitudes to women. These personal faults, to the extent they exist, don’t stand up to war with Russia in terms of a threat. In any case, I don’t believe Trump could establish American fascism, as some have been screaming. He simply doesn’t have a coherent enough ideology. Trump is no Mussolini, though he may well be an American Berlusconi.

On Syria, Trump is basically right. If Assad falls, it is jihadists who will take over, whether they call themselves ISIS or not. Trump recognizes that the best thing for American interests (to the extent those interests are not identical with corporate interests) is to let Russia continue to protect Assad, and let Russia and Assad knock themselves out bombing the ragtag horde of jihadists now fighting the Syrian state. Hillary, meanwhile, sounds literally nuts on this issue. And it’s a nuttiness we cannot afford--not any more, and certainly not this time, not with Russia deeply involved.

Trump is a loose cannon and narcissist of the first order. He is, however, not nearly as likely to continue trying to remake every state in the Middle East through American firepower. His positions are more trade oriented, isolationist, ultimately pragmatic and domestic in scope. The corporations don’t want pragmatic, or domestic, and so they hate him. But what represents the real danger for us at present--the unfettered military/corporate power Hillary shills for, the ongoing march of aggressive globalization, or the politically incorrect behavior of a Donald Trump?

At the very least, Trump and Clinton both represent serious dangers. The assumption that we must vote Clinton to “protect us” from Trump, however, seems to me a case of willful blindness.

Look at the name "they gave" the "terrorists" that they created, ironic maybe, the Goddess Isis, as Freemasons say, Look to the East, Me thinks this will be the reflexive result the Puppeteer planned "Out of Chaos comes Order" huh, too bad for the pigs, the logos is $