I haven't read Joseph Campbell since I was an undergrad, which is unfortunate, as the man was a font of insight into the good life and how one might attain it. Recently I picked up a copy of The Power of Myth, Campbell's interviews with Bill Moyers, and have been impressed again by the breadth of his interests, his wisdom. Now, in my forties, I'm better able to appreciate what he was teaching. Here he explains his approach to truth via "bliss":

CAMPBELL: . . . I came back from Europe as a student in 1929, just three weeks before the Wall Street crash, so I didn't have a job for five years. There just wasn't a job. That was a great time for me.

MOYERS: A great time? The depth of the Depression? What was wonderful about it?

CAMPBELL: I didn't feel poor, I just felt that I didn't have any money. People were so good to each other at that time. . . .

There was a wonderful old man up in Woodstock, New York, who had a piece of property with these little chicken coop places he would rent out for twenty dollars a year or so to any young person he thought might have a future in the arts. There was no running water, only here and there a well and a pump. He declared he wouldn't install running water because he didn't like the class of people it attracted. That is where I did most of my basic reading and work. It was great. I was following my bliss.

Now, I came to the idea of bliss because in Sanskrit, which is the great spiritual language of the world, there are three terms that represent the brink, the jumping off place to the ocean of transcendence: Sat, Chit, Ananda. The word Sat means being. Chit means consciousness. Ananda means bliss or rapture. I thought, "I don't know whether my consciousness is proper consciousness or not; I don't know whether what I know of my being is my proper being or not; but I do know where my rapture is. So let me hang on to rapture, and that will bring me both my consciousness and my being." I think it worked.

CAMPBELL: Each person can have his own depth, experience, and some conviction of being in touch with his own sat-chit-ananda, his own being through consciousness and bliss. The religious people tell us we really won't experience bliss until we die and go to heaven. But I believe in having as much as you can of this experience while you are still alive.

MOYERS: Do you ever have this sense when you are following your bliss, as I have at moments, of being helped by hidden hands?

CAMPBELL: All the time. It is miraculous. I even have a superstition that has grown on me as the result of invisible hands coming all the time--namely, that if you do follow your bliss you put yourself on a kind of track that has been there all the while, waiting for you, and the life that you ought to be living is the one you are living. When you can see that, you begin to meet people who are in the field of your bliss, and they open the doors to you. I say, follow your bliss and don't be afraid, and doors will open where you didn't know they were going to be.

Check Campbell's The Power of Myth at Amazon. 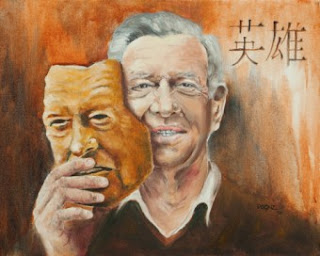 Portrait of Campbell with the Chinese for 'hero', alluding to his early work The Hero with a Thousand Faces. Artist unknown.