Flannery O'Connor on the Art of Fiction 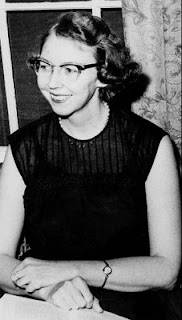 That many of Flannery O’Connor’s early admirers had no idea they were reading the work of a deeply committed Catholic is little surprise: her stories are mordant and gruesome to a degree incompatible with the common idea of a “Christian writer.” In the minds of many, the Christian writer is a pious and blinkered sort, and must be, above all, inoffensive. O’Connor was none of this. Shot through with mania and black humor, often violent, her writing cut to the bone. And so it became a point of curiosity for many readers to get to the bottom of just how this writer was also a Catholic writer. Where were the edifying homilies, the clean cut role models? There was a paradox they felt needed to be resolved.

For O’Connor her fiction made no sense outside the context of the world she saw through her Catholic faith. O’Connor’s idea of what she is up to in her brutally realistic stories makes for one of the strongest Christian apologies for literature in the last century. Though she never wrote a book on her particular Catholic poetics, her ideas hold together compellingly. But one must look for these ideas spread across her correspondence and in a few brief essays she wrote on the subject.

Ralph Ellsberg’s collection Flannery O’Connor: Spiritual Writings is an excellent place to find some of O’Connor’s strongest statements on the art of fiction. It was Ellsberg’s wise decision as editor of this compact collection to include not only the writer’s musings about the faith per se, but also her arguments on the technique and purpose of writing novels and stories. Spiritual Writings contains key passages from O’Connor’s letters, essays and stories, as well as one complete story, “Revelation.” There’s also a biographical introduction by Richard Giannone.

Readers wanting a deeper understanding of O’Connor couldn’t do better than read the stories alongside the writer’s statements on her beliefs and on her goals. Spiritual Writings is the best short collection available.

Below, by way of my own notes, I’ve typed up some quotes. Most are from O’Connor’s correspondence.

I am mighty tired of reading reviews that call A Good Man [Is Hard to Find] brutal and sarcastic. The stories are hard but they are hard because there is nothing harder or less sentimental than Christian realism. I believe that there are many rough beasts now slouching toward Bethlehem to be born and that I have reported the progress of a few of them, and when I see these stories described as horror stories I am always amused because the reviewer always has hold of the wrong horror. (1955)

To see Christ as God and man is probably no more difficult today than it has always been, even if today there seem to be more reasons to doubt. For you it may be a matter of not being able to accept what you call a suspension of the laws of the flesh and the physical, but for my part I think that when I know what the laws of the flesh and the physical really are, then I will know what God is. (1955)

Mystery isn’t something that is gradually evaporating. It grows along with knowledge. (1962)

The serious writer has always taken the flaw in human nature for his starting point, usually the flaw in an otherwise admirable character. (1963)

In the gospels it was the devils who first recognized Christ and the evangelists didn’t censor this information. They apparently thought it was pretty good witness. It scandalizes us when we see the same thing in modern dress only because we have this defensive attitude toward the faith. (1963)

What kept me a skeptic in college was precisely my Christian faith. It always said: wait, don’t bite on this, get a wider picture, continue to read. (1962)

The novelist is required to open his eyes on the world around him and look. If what he sees is not highly edifying, he is still required to look. Then he is required to reproduce, with words, what he sees. Now this is the first point at which the novelist who is a Catholic may feel some friction between what he is supposed to do as a novelist and what he is supposed to do as a Catholic, for what he sees at all times is fallen man perverted by false philosophies. Is he to reproduce this? Or is he to change what he sees and make it, instead of what it is, what in the light of faith he thinks it ought to be? Is he, As Baron von Hügel has said, to “tidy up reality”? . . .

There is no reason why fixed dogma should fix anything that the writer sees in the world. On the contrary, dogma is an instrument for penetrating reality. . . The Catholic fiction writer is entirely free to observe. He feels no call to take on the duties of God or to create a new universe. . . . For him, to “tidy up reality” is certainly to succumb to the sin of pride. Open and free observation is founded on our ultimate faith that the universe if meaningful, as the Church teaches. . .

The fiction writer should be characterized by his kind of vision. His kind of vision is prophetic vision. Prophecy, which is dependent on the imaginative and not the moral faculty, need not be a matter of predicting the future. The prophet is a realist of distances, and it is this kind of realism that goes into great novels. It is the realism which does not hesitate to distort appearances in order to show a hidden truth.

For the Catholic novelist, the prophetic vision is not simply a matter of his personal imaginative gift; it is also a matter of the Church’s gift, which, unlike his own, is safeguarded and deals with greater matters. It is one of the functions of the Church to transmit the prophetic vision that is good for all time, and when the novelist has this as a part of his own vision, he has a powerful extension of sight.

It is, unfortunately, a means of extension which we constantly abuse by thinking that we can close our own eyes and that the eyes of the Church will do the seeing. They will not. . . . When the Catholic novelist closes his own eyes and tries to see with the eyes of the Church, the result is another addition to that large body of pious trash for which we have so long been famous. (“Catholic Novelists and Their Readers,” 1964)

End of the World Zoo 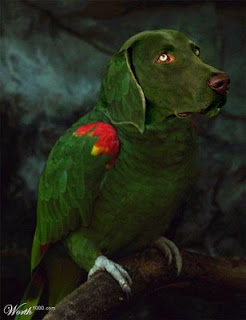 I'm thinking bioethics laws may be a bit lax over here.

In 2004 an acquaintance of mine in Taipei with connections and a background in genetics got funding and a bit of public space to open a new experimental zoo. Well, originally it wasn't meant to be an entire zoo, just an aviary featuring Taiwan's bird species. But it was going to be an aviary with a difference. He and his investors thought to make millions by displaying not just actual Taiwan birds, but a few "newer things" they'd come up with on their own.

At the time I told him I thought it sounded a bit out of line--modifying bird species I mean. But really I had no idea. To see these pictures I expect there's going to be some quite pissed off people out there.

Just last week they let Alex Worth, a local nature photographer, take some shots in their until now off-limits aviary. They're calling it the "Taiwan Open Aviary." It seems genetically mixing bird species wasn't enough for them: they couldn't resist dabbling in some other species too.

Worth himself is furious.

"I wanted to get it all documented," he told me. "I couldn't believe what was going on in there. It's sick."

But the guys behind all the experiments don't see what the fuss is all about.

"We'd like to start work on improving the human species as well," my friend Chen said at a recent lunch meeting. "We're hoping the world will be so impressed by what we've done so far that they'll realize how interesting we could make human beings."

"Imagine the Olympics with cheetah-humans running for the gold," another of the founders said. "It's really exciting what we could do. And imagine all the new clothing lines--the money to be made! Want a piece of the action?"

I bought into the dotcom boom in 1990s. Then I put my remaining money in the market two years ago. Now I'm thinking: Wow, I should have waited. This is going to be BIG. 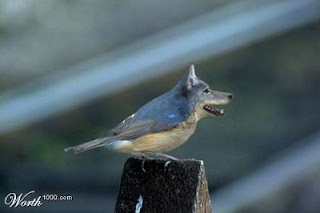 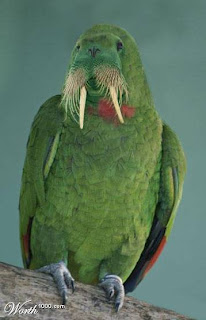 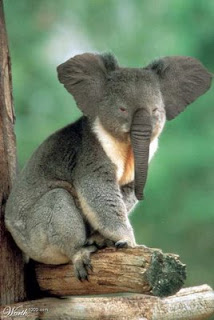 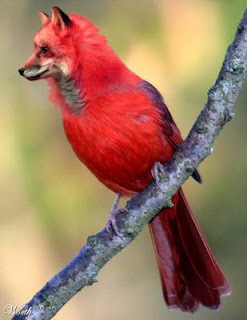 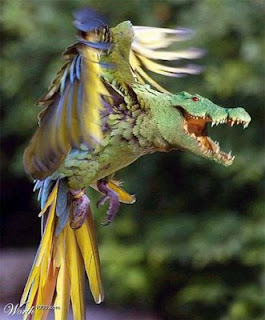 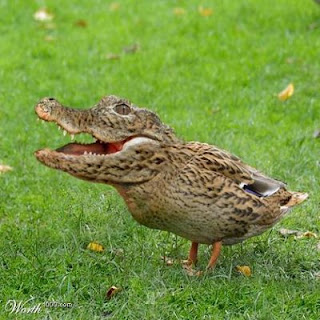 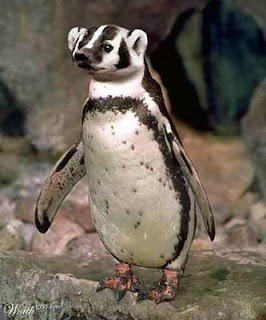 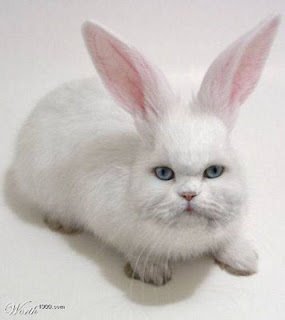 I probably ought to get Mike Hunt over at the Disassociated Press on this story. Hunt is the guy who uncovered the Marzipan Babies plot back in 2007. If it weren't for his whistle-blowing back then, we might be looking at a McCain-Palin inauguration next month. Which to me is scarier than any hound-headed parrot.

My Father (by Yvonne)

A short composition by one of my adolescent students at ZEI. The task was to "describe someone important in your life." Yvonne, pictured below, did a great job.

MY FATHER
My father is the most important person in my life. I can’t forget his appearance. He’s fatter than a pig, his feet are bigger than a car, his muscles are bigger than a gorilla’s, his face is more circular than a compass, and he has thick glasses.

He’s fully an adventurer. He’s more sociable than all the dames. With everything he does, after one minute he will start to get bored. He doesn’t care what he will be in the future, and he likes excitement, such as playing with animals.

He has many strange behaviors. He always does 1,440 things each day, he knows everyone in the world, he doesn’t care if he becomes a street cleaner, and he plays with lions at the zoo.

He’s my backer. When I need help, he helps me. He’s a river: he leads my through the wild woods. He’s a bridge: he conducts me so I don’t fall into the crime of river. He’s the warmth, the worm deep in my heart: he’ll share my tears. In my brain, he’s my god, always. 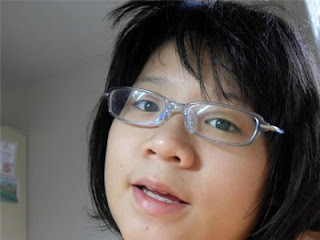 Yvonne is one of the sharpest students I've taught in my years at ZEI. She's creative in her writing, and great at interpreting the stories we read in class.