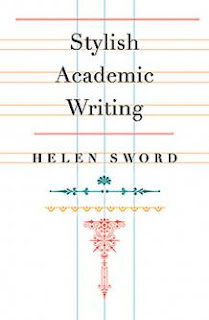 With an apt nod to Orwell's "Politics and the English Language," Bradley Winterton took on Helen Sword's Stylish Academic Writing in the Taipei Times yesterday. Though I haven't read Sword's book, I wanted to respond to a couple points in the review.

In general I agree with Winterton that much academic writing suffers from a serious addiction to theoretical discourse. Like many heavy addictions, this one often proves fatal. Every passing month sees dozens of academic journals reach libraries dead on arrival.

But the excesses of what is often an addiction only make for part of the story. The theoretical terminology used in the humanities, especially in literature departments, can't be explained in any one way; it can't always be labelled "jargon" or "obscurantism" and that is the end of it. Rather, each instance--each academic paper, say--must be characterized on its merits.

I find most academic writing falls into one of the following three types. Of course they sometimes overlap. And of course I'm sometimes at a loss to be quite sure what type of paper I'm reading:

1) Very often what looks like needless jargon and obfuscation really isn't. Rather it is a matter of a serious scholar using language, the language of his or her specialty, as precisely as possible. And there's nothing wrong with scholars advancing a discourse in some area of study: scholars developing difficult arguments for other scholars to assess. Philosophy, linguistics, psychoanalysis--each has given us important new ways of understanding literature or other cultural practices, and each has its necessary terminology, which will always sound like "jargon" to people who don't study it. That these terminologies are difficult to master doesn't mean that they are simply nonsense. Like literature profs, electrical engineers discussing problems in their field will not be understood by outsiders. Nonetheless the engineers are rarely accused of spewing jargon. This is because most people believe in electrical engineering in a way they don't believe in literary study.

2) Very often what looks like needless jargon is just that: it really is a scholar using theoretical terms to window dress the writing so as to make it more suitable for academic publication. Sad, but true.

3) Very often what looks like needless jargon is terminology being employed as a kind of safe in-language. It counts as jargon because it's being used in the way Winterton stresses in his review: as a shibboleth. Such usage is legible to those in the know, thus establishing who's "in,"' while it keeps out the prying eyes of others. Yes, it seems academics often avoid saying too bluntly what they and their peers have agreed to already. Namely, that what is wanted is a radical reworking of society--heads will roll--one which, however, they personally aren't quite brave enough to fight for in their present circumstances. As a student in Comparative Literature in the 1980s, I was often impressed by how very radical the discourses were and how very conformist the professors were.

So in cases 2 and 3, yes, I think we should talk of jargon and obfuscation. But I believe many academics are writing work that should be seen as category 1.

I was having coffee the other day with an English Dept. professor here, at Taiwan Normal University, and she lamented how grad students always feel they "have to insert theory into their work one way or another." The problem is right there, in the verb. "Inserting theory" is something these students are doing almost after the fact of reading. If they were really engaged in the theoretical approach in question, their very approach would determine the content of the essay: the theory in terms of which they work would unveil things about the text, and these discoveries would be the basis of their paper. Instead, many grad students are reading literature much like other people read, they're coming up with normal readerly insights about the text, then having to window dress these insights with terminology that such insights don't really need. This is where a lot of the problem with "jargon" in the humanities comes up. Because some of these grad students (the lucky ones?) will become academics and continue to work in much the same way.

Wouldn't it be better if academic literature departments could support the existence of both very learned literary people, in the traditional sense, and more theoretically inclined scholars--all under the same roof? I mean, on the one hand, the department would have people who could read difficult works of literature and recognize from the get-go nearly all the allusions--this precisely because they've done almost nothing but read literature for decades--and, on the other hand, people who could adeptly write worthwhile work on what Lacan can teach us about Keats. Instead, what we get, because of the need (which Winterton points out) to ape the sciences, is literature departments that ONLY accept work done under the directives of theory. The former ability, that basic ability to read and present texts at a high level of cultural literacy, is downplayed. Which is doubtless part of the reason we are seeing our societies in general ever more skeptical of the value of literary study.

And while some people say we are entering a new period--"after theory"--I feel sadly that we might be entering a different kind of new period: after literature departments.

Posted by Eric Mader at 3:56 AM No comments: 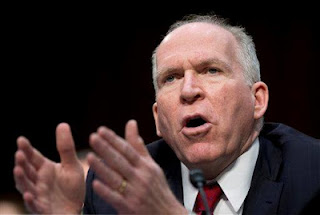 In his testimony Mr. Brennan sought to put to rest various rumors, assuring the committee that a citizen would be considered immune from lethal drone strike while seated on a toilet, provided the toilet was on US soil and connected to a plumbing system "in the main" on US territory.

Asked if this applied to both private and publicly owned toilets, Brennan clarified: "For the time being we can only guarantee immunity in the case of privately owned toilets. In other words, a toilet on the private property of the American citizen in question."

Asked if a citizen could be subject to a targeted killing while buying an ice cream cone for his child, Brennan reiterated the administration's position.

"It depends on the flavor," he said. "Also, is the citizen in question in the vicinity of any women wearing Muslim garb: a veil, for instance. These are factors we will take into account."

Asked if a citizen could be subject to a killing in his or her dreams, Brennan said: "We don't envision such actions at present. We're working on the technology, but we're not there yet."

Posted by Eric Mader at 1:02 PM No comments: