It's a start, Canada

An open letter to Canadians on the recent happenings in Toronto.

Don't think we Yankees don't know what you're up to. Your Toronto mayor fiasco, which may or may not be finally winding down, has envy written all over it. We your neighbors to the south can see clearly what it's all about. You're trying to be like us.

Don't get me wrong. It's not that we blame you for it. It must be hard sitting up there in the snow watching the superpower beneath your border melt down in such spectacular psychotic dysfunction while you have nothing even remotely exciting to match it with.

We know it's been tough.

So in truth I kind of gotta hand it to you. The Rob Ford scandal shows initiative. And it was pretty well done all around. Of course I know it was all staged; but still, the conception of the thing wasn't bad.

On the one hand you've long wanted a Rush Limbaugh of your own; on the other hand you were really smarting recently from all the global attention Miley Cyrus got with her little atrocity show. So what to do? Why not create a single national figure who combines the best of Limbaugh and Cyrus. A Rush-Miley hybrid. Voila Toronto Mayor Rob Ford. 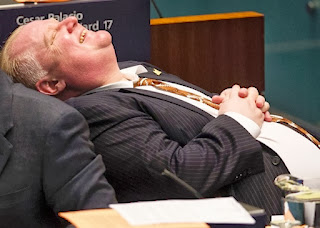 You see I'm onto you, no? It's obvious that your Rob Ford was conceived and hatched as just such a hybrid. He has the Tea Party politics and roly-poly dumb look of Rush Limbaugh; at the same time his skin is smoother and pinker than Limbaugh's, and is actually quite like Miley's. Do I need to even mention the Miley-like drug use?

Then there's the mayor's clumsy tackling of city councilor Pam McConnell--who can't see this move for what it is, a subtle Canadian allusion to Miley's graceless twerking on Robin Thicke? But maybe this dramatic touch was a bit too subtle for most Americans, who pride themselves on their thickness. Still it wasn't lost on me. I'm a reader of Leonard Cohen, you know. And Margaret Atwood sometimes.

And just now I realize: isn't the idea of giving your idiotic mayor his own reality show a veiled reference to Sarah Palin and her reality show? At least, unlike us, you can boast the good taste of canceling the show before it even got off the ground.

Since the world is coming to an end soon, you Canadians don't have much time left to catch up to us in this game of large-scale Cultural Pathology. But your Rob Ford scandal is at least a start. I wish you well in any further attempts you may make. And I'll be paying attention to Canada in coming years. Which is something few Americans have ever done. So congratulations.

Addendum: My friend JS Porter just informed me by email that someone had already Photoshopped Ford's face onto Miley's "Wrecking Ball" video. So I guess I've been scooped. --E.M.
Posted by Eric Mader at 12:00 PM No comments: