My new book Heretic Days is finally in print. 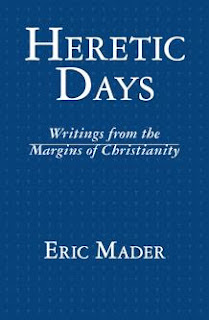 Canadian critic J.S. Porter writes of the book: "Heretic Days is grand theatre--a drama enacted in Eric Mader's subtle and playful mind. Mader queries, dramatizes, teases, mocks, pronounces, parodies, lunges, and finally burrows down into some the of the most intractable conundrums facing Christian seekers today. I know of no other writer who reads theology so deeply and so well. You come away from his work with a new understanding of play as sacrament. Think of this book as a stage onto which skip Tolstoy, St. Paul, the Gnostics, William Blake, Leonard Cohen, and, above all, Jesus, who makes many entrances and commands the most stage-time; think of it as Marionette Theatre where ideas come to play, parry with each other, bow, exit and re-enter with new masks and voices. In this play Mader keeps a directorial eye on his constant theme--Who was Jesus? How do we come to know him? What does he mean for our lives and, especially, what did he intend to mean?"

And I'm pleased to be labeled an "endlessly fascinating eccentric" by Bradley Winterton in his Taipei Times review. Winterton writes: "[U]npredictability is Mader's stock in trade. . . absolutely everything he puts his hand to is consequently very well worth reading, including this bizarre but intensely readable book." NB: Winterton's review is much appreciated, but I should note he wrongly characterizes me as a gnostic. Though I'd been long engaged in study and thinking about the recently uncovered gnostic texts (the Nag Hammadi codices) by the time this book was published I'd converted to Catholicism. And during the years of writing the pieces that make up the book, I considered myself a Christian, but one on the margins of orthodoxy.

The book is available in print and Kindle versions at Amazon. 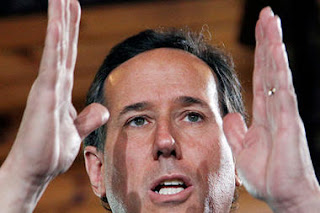 The Santorex will be produced and sold in single-use packets in the US. The new condom has been specially designed to fit over Republican contender Rick Santorum's head, and is intended to "prevent the spread of idiotic soundbites and extremist nonsense," said a company spokesman.

"We envision users attending either GOP debates or Santorum rallies," said Schafft. "We're hoping they will step forward and pull the condom down over the candidate's head. Our testing shows the new condom is 97% effective in preventing seepage of moronic remarks." 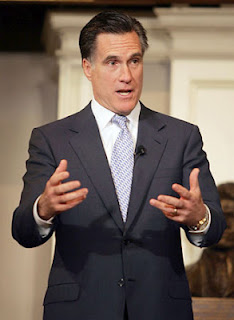 Posted by Eric Mader at 3:34 PM No comments:

Slavery and Resistance in Madison, Wisconsin 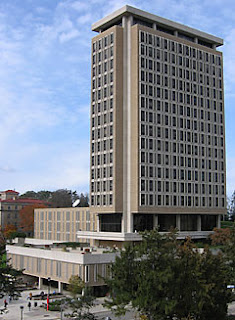 UW Madison's Van Hise Hall, where the jargon grows thick and the intrigues never end.
Barry Powell's A Land of Slaves is an academic murder mystery with a difference. Unlike many academic novels, it makes thoroughly enjoyable reading, suffering none of the stylistic fatigue one comes to expect from novels written by professors. Powell's unique style, a kind of jerky subdued lyricism, hard-boiled in a way that's hard to pin down, keeps one turning the pages. His sleuth Raymond Birch is not so much sleuthing as harried into putting the broken pieces of the story into place, meanwhile exposing the layers upon layers of lies that made for the life of now dead art historian Wally Wills. The portrait of Wills is both sad and hilarious: that such a character could conduct a successful decades-long career in the pinched milieu of a modern art history department is stuff enough to wonder at, though the tale, as narrated, doesn't really seem farfetched.

Aside from being partial murder mystery, Powell's book can also count as academic satire. But again with a welcome difference. Protagonist Raymond Birch has far too much reality about him to be the mere straight man in another exposé of the excesses of theory. There aren't many passages here that directly satirize literary-academic cant. The few Powell offers are just enough to define the milieu.

One of these passages comes near the book's end. Beleaguered by academic infighting, still reeling from the unanswered questions of his best friend's death, Birch enters a darkened auditorium to listen to one of his peers deliver a paper at the international Oral Poetry conference. The speaker is already at the podium, mid-paper, and since Birch enters from the wrong door, a door abutting the stage, he quickly sits down in the front row:

"An impassionate person's passionate need to rebuild the text from within freed from authorial intention and reveling in the oceanic feminine that underlies the stiff (and stiffening) clarity of male cannibalistic gendered greed," the speaker, a elderly male, was saying.

Birch really wasn't feeling very well. He leaned his head forward on his knees and stared at the carpet. . . . [He] straightened up to gaze along the row of gilt chairs. He was startled to see that he was the only one sitting in the first ten rows. Nobody wanted to be too close to a speaker of this magnitude!

"While the modern scholar needs to make concessions," he was saying, "she or he has still to hang onto the hog or the hog is going to get lickety-split away down the path!"

"What is this shit anyway? What a croc of shit," Birch said under his breath but louder than he had intended.

Oh my God, what if somebody heard?

The mendacities of academia are legion, and here both the speaker and Birch are implicated (though the speaker is obviously implicated on many more levels than Birch). Birch is attending the conference to keep up appearances among colleagues set upon ousting him from his department. But he has a tic that comes with his feverish and introspective character: he occasionally thinks out loud. Such a tic can be a real problem for anyone trying to maneuver academic politics.

Luckily, as I say, Powell doesn't use up many pages in A Land of Slaves transcribing the slavish kinds of discourse now common in humanities. This shows a wise restraint on his part. Anyone who's been in these departments, after all, has already seen more than enough such obsequious pandering. Rather, the all-encompassing political correctitude of the academy is taken as background, and Powell's characters come to life in their often hopeless struggles to make careers on such a degraded stage.

As an alum of the university where the action is set (the University of Wisconsin-Madison) I can attest to Powell's skill at evoking environment. He's particularly good at describing the lakeside paths and neighborhoods and student union, as well as the oppressiveness of the building where the university's language departments are housed. There is also the 666 Club, which was in reality the 602 Club (is it still there?). I suspect A Land of Slaves is in large part a roman à clef, but since I'm not familiar with the classics and art departments there in recent years, I'm not sure who most of Powell's characters echo, or who they might be composites of. I'm pretty sure, however, about the models for Wally Wills and Raymond Birch. I believe Powell has taken events of the early 1990s and recast them in the late 2000s. The man Wally Wills is based on--I believe I sat in on some of his lectures on Greek vase painting in the 1980s. I've no idea however if the real scholar's death unwove anything like the tapestry of lies that Raymond Birch unweaves in the novel. And did I possibly, around 1986, take first semester classical Greek with the woman Audrey Winter is based on?

But these identifications are mostly beside the point. Powell's novel is a novel, and I think most readers, familiar or not with Madison, Wisconsin, will find it a fascinating portrait of pathological lying, art collecting, small-time drug dealing, lousy police work, and (of course) academic slavishness--besides finding it a compelling work of narrative, executed in a new narrative voice I'd be happy to hear more of. A Land of Slaves is available in print and Kindle versions at Amazon.
Posted by Eric Mader at 1:59 PM No comments:

Teaching two 11-year-old girls the word "dangerous," I ask them to name some dangerous animals.

"You're a dangerous animal," says one.

"OK," I say. "Maybe. Can you name any other dangerous animals?"

"Your hair," the other girl says. And she explains that my hair and I are actually different animals, that my hair leaves my head at night and flies around the city following girls and feeding on moths.