What is the Afterlife? 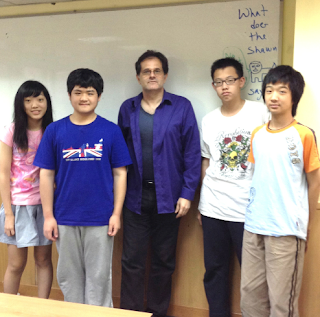 My small Saturday class has impressed me again. I talked with them a bit about different cultures’ ideas of the afterlife--I mentioned Christian and Muslim ideas, Buddhist ideas, including reincarnation, and different ancient pagan ideas--then wrote their assignment on the board:

Do you believe you have a soul that will continue after death, or do you think you only have a physical body? Many people in the world, following different religions, believe there is some kind of afterlife; others believe that when we die we cease to exist. Whether you believe in an afterlife or not, for this assignment I want you to imagine that you have died and discovered that in fact there is an afterlife.

It is now three hours after your death. What has been your experience during these three hours? Where are you now? Are you alone? Do you know anything about where you will be in the future?

You have twenty minutes to write.


These are the four versions of the afterlife they gave me. 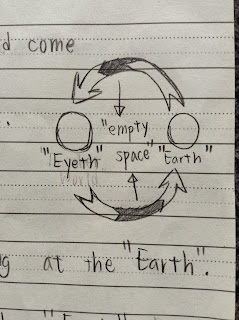 I’ve been dead for three hours, my soul left my body and now I’m trying to figure out what to do next.

The last three hours might be the most painful time of my life. I didn’t want to stay beside my body and watch people crying for my death, so I decided to leave the hospital and take a last tour of the city.

Being bodiless is kind of convenient. I didn’t have to walk at all, I don’t have to pay attention to traffic lights, and I could get everywhere I wanted to go by only thinking about it.

I went to places where I had created lots of beautiful memories with friends and family. I thought about things I’d done in my life: what I did right and what I did wrong.

Later I was sitting in a park and an angel appeared. He said I would only have 24 hours to stay in the world, and also I could get into the dreams of people who still wanted to see me again. I could talk to them again and say goodbye for the last time. And then I will be in the heaven, living an afterlife.

So now I’m thinking, with 21 hours left, what is the thing that I should do? (And god damn it, why the hell did the angel only show up 3 hours after my death? He should show up immediately!)

It is now three hours after my death. I can’t see anything that isn’t in darkness. I don’t know where I am. I think I am floating in the sky, higher and higher.

Abruptly, I feel a strong light. I am on the ground. I don’t know where it is. Then I see a house, not so far, so I go into it. When I walk in, I see many pictures of animals and insects, and there are some points under them. A man is using a computer near me.

“Here you can choose what you want to be in your next life, but not everything. You did many good things in your life, so you have 1000 points, but you can’t choose the animals which are more than 1000 points like pandas.”

I chose human and thought: “I have to do more good things this time and I can be an animal which is better in my next life.”

It is now three hours after my death. My soul is getting away from my body, and I can see that there’s a long tunnel leading toward me, with a shining light. I can’t see the end of the tunnel, and there’s no reason why I’m going straight down.

After a while, I take a train with no color, keep going in the tunnel. The train has many windows, but they seem like DVD players, playing my life, telling all the good or bad things to me. My tears keep bubbling up.

After my life has finished playing, the tunnel has ended too. I can’t control my body, and I can’t move, it feels like a large hand pressing me tightly onto the seat.

Suddenly a “god” appears in front of me. He speaks with a deep, deep voice, and shoots me with his dark, cold eyes, but I don’t have any fear. He tells me that because of my behavior during life I deserve to go to heaven, and he raises up his hands, just like magic, makes a big wave and leads me to heaven. I’m not happy, also not sad. I have no feelings now.

When I get to heaven, a lot of people who have died are welcoming me with their hands. Maybe this is my new home now. We can’t speak to each other, can’t smile, but our feelings strangely go right to each other. We enjoy the sunlight every day, and enjoy our afterlife.

Now I’m in the “empty space”. There is nothing about “afterlife” exactly. After we die, we will come to the empty space and pass through it. Once we pass through, we appear in the “Eyeth”. Also, we forget everything from the “Earth”. 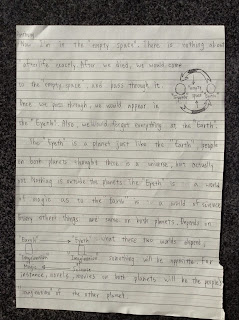 Every time we come to the Eyeth or the Earth, we will be the same person as last time we came, but the environment will change. Sometimes it will be better, sometimes not. Maybe next time when I go to the Earth, the world will be at 2000 B.C. or 5000 A.D. Nobody knows.

While in the “empty spaces”, we see nothing, just emptiness, there is no other world to describe it. Getting through the empty space, you’ll remember something about yourself on the next world. After that, you’ll be on that planet.

Nobody, wrong, no soul knows why this is happening. Maybe some other more powerful race is controlling it, but no soul can understand.

Unfortunately, the very talented smart-ass Ryan (蔡睿敏) was absent this time, which was really too bad, because he often writes fascinating things. Next time, Ryan! 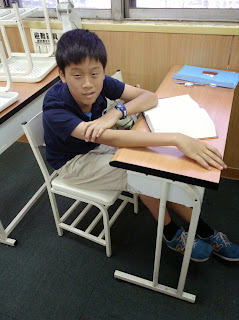 Ryan--getting ready to say something smart-assed.

Posted by Eric Mader at 2:37 PM No comments: