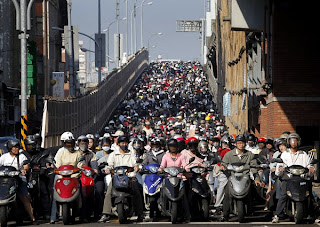 2. You look both ways before crossing the sidewalk.

3. You turn left from the right lane.

5. You see three people on a motorcycle and figure there's room for two more.

7. There are more things strapped to your motorcycle than you ever put in a car.

8. You drive on the shoulder to pass traffic.

10. Firecrackers don't wake you up.

11. You can distinguish Taiwanese from Hakka.

15. You stop and look both ways before driving through a red light.

17. You wear out your horn before your brakes.

18. The police call you to get information about other foreigners.

20. You speak Chinese to your foreign friends too.

21. You own a karaoke machine.

22. You leave the plastic on all new purchases.

24. The shortest distance between two points involves going through an alley.

25. People don't see you for months, and when they do, they don't ask you where you've been.

26. You hear Chinese remakes of Western songs before you hear the originals.

27. You stare at other foreigners.

28. Over half of your clothes were bought at night markets.

29. You become an expert on bug zappers: the best brands and where to get them.

30. You have an arsenal of subtle verbal dodges to deflect taxi drivers from prying into your personal life.

31. You know which turn signal should be on when reversing the wrong way down a one-way street.

32. You get homesick for Chinese food while away from Taiwan.

33. Praying at a temple for a winning lottery number becomes a regular thing to do.

34. Other foreigners give you a funny look when you tell them how long you've been here.

35. You can't think of any good reason to leave.

36. The Statute of Limitations has expired and you still don't go home.

37. You understand that smiling and nodding is Chinese body language for "Go away and leave me alone."

38. You've spent more time on the island since 1990 than most of the Taiwanese you know.

39. Locals are surprised to find out you can't vote in the upcoming election.

40. You never bother to ask locals questions like: "Is that north of the park?" or "Is that on the east or west side of the campus?"

41. Pizza just doesn't taste right unless there's corn on it.

42. Your preferred parking spot is on a sidewalk (and you get upset when someone else parks there).

43. Most meaningful conversations take place in doorways or on slow-moving motorcycles.

44. Your job title has more than three words.

45. You think the service in restaurants isn't that bad.

46. You're always the first on the elevator to hit the "door close" button.

47. You start cutting off the gravel trucks.

49. You no longer send home bizarre and humorous articles from the paper.

50. You think of walking down the sidewalk as a sport.

51. You spend more time driving on the lines instead of in between them.

52. You read books from back to front.

54. You think packs of dogs are cute.

55. You are back in your home country and you say "hsie hsie" instead of thank you.

56. You think that all babies have flat heads in the back.

59. You think that Taiwan is really trying to protect endangered species.

60. Your pinkie nail is over one inch long.

61. You catch yourself telling a taxi driver to hurry up.

64. You think it's normal for people over 30 to zigzag down the sidewalk.

65. You can tell the difference between spring rain, plum rain, and the rainy season.

66. The last time you visited your mother you presented her with your business card.

67. You can tell, just by looking, which moon cake has the egg in it.

68. You feel nervous and giddy when you get around fresh air.

70. Everything you own is pirated.

71. You get used to the habit of not paying any tips while traveling.

72. You can read and write romanized Chinese in three different systems.

73. The red light is merely suggestive to you.

74. You greet people by inspecting whatever they're carrying or telling them how fat they've gotten.

75. You can no longer tell the difference between a cracker and a cookie, or toast and bread.

76. You stop telling people about the giant cockroach you saw.

78. You can tell the difference between different foreign accents in Chinese.

79. Your parties have an agenda, but your meetings don't.

80. Getting in an accident, you tell the ambulance driver which hospital to take you to.

81. You stumble going up a flight of steps that are all the same height.

84. You don't much mind drinking beer with ice cubes in it.

85. You don't expect to get workable directions, whether in English or Chinese.

86. You wear your coat backwards when riding a scooter.

87. You make elevators go faster by boarding first and taking over the controls.

88. You're very concerned about not losing face.

89. The words "Ice Cream" never enter your head when you hear the garbage truck.

90. You don't feel comfortable using a urinal unless there's a woman mopping the floor behind you.

Any you'd like to add to this list, feel free to do so in the comments. --E.M.

The people are all in an uproar
The talk shows are flooded with calls
From parents irate
Who cry it's too late:
"Our sons have pearl milk balls!"

The future it looks a bit bleaker
All swish and raucous cat calls
But who will confess
To this free-market mess
If they're packing just pearl milk balls?

Anyone new to Taiwan will immediately notice how the locals go for all things soft and chewy: chewy candy, chewy desserts, even drinks with chewy "pearls" floating in them. "Pearl milk tea" is probably the most famous of these local delicacies.

Unfortunately, researchers have recently discovered that many local companies produce these candies, desserts and jellies with the help of an emulsifier that is, well, basically plastic. This plastic emulsifier is cheaper and, not surprisingly, has a longer shelf life than natural alternatives. So Taiwan's population has unknowingly been consuming plastic as an ingredient in many of its food products: in the desserts mentioned, plus some fruit juices, plus children's chewable vitamins, syrups, and many other products too. It amounts to a huge health oversight on the part of society at large.

But how could this happen? Why wasn't this known until now? Because the government, firmly capitalist in outlook, never wanted to interfere in the free market, so there is scarce any regulatory arm. And what is the fallout of this huge ingestion of plastic? Research suggests the the plastic in question is linked to a variety of health problems, stunted male development being one, since it functions in the developing male body almost like a surrogate female hormone:

DEHP is suspected to be an endocrine disruptor, which could lead to the shrinking in size of the penis and testicles in men and thyroid dysfunction.

This is all still preliminary, but, wow, don't you just love free-market capitalism? Twenty-three million Taiwanese have been eating this stuff regularly since the 1980s, and, if my guess is right, its use in products has steadily grown over that time, most of it being in food and drinks marketed to kids. --E.M.

Reports from the Taipei Times: