An alligator is a moldy log with a serious attitude problem; it is an in-sink disposal on four legs.

Alligators were first created by breeding George Burns with a Plesiosaurus. That alligators love golf courses isn't just because of the ponds: it's a genetic inheritance from the father.

When alligators speak, they do so with George Burns' voice. But they speak only rarely.

In Florida I have personally seen alligators that can drive cars. They typically opt for vintage Cadillacs with Shriner emblems on the trunk. They drive slowly, almost like low-riders.

I once accosted one at a red light. He sat behind the wheel of his maroon Cadillac and had his window down. His baseball cap was a meager disguise.

"You're an alligator," I said.

He laughed and pulled out his huge set of false teeth to show me.

"Want a ride, kid?" he asked through gross gator gums.

"No fucking way," I replied with a smile. "But you have a good one."

He slipped the teeth back in and the light turned green.

Mixed with acacia gum and inserted as a pessary, alligator dung is an effective contraceptive.

Certain alligators, those that abstain from mammal carrion, are allowed the possibility of becoming Angels when they die. I have talked with Floridians who have witnessed them "turning" just after death, rising up over the Everglades in a burst of beatific light, their long bodies still reptilian, their white Angel wings spread wide. 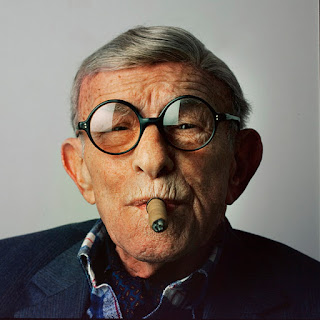 Posted by Eric Mader at 4:41 PM No comments:

Only an American could write a story as small-minded and moronic as Kenneth Bernard's "Preparations". I found this short piece anthologized in Sudden Fiction International. Utterly vulgar in its pseudo-intellectualism, potty-brained in a jittery post-Puritan way, I wondered as I read along how Bernard was ever going to get his narrator out of the muck the piece begins in. But the tale only got worse and worse until, in a paroxysm of dumb cliche, the writer used his last words to label poor Anya a sweaty pig as she mutters "guttural sweet Russian" to the dying narrator. The supposedly profound musings that take up most of the body of this story make me want to wretch.

I know I haven't even explained the gist of this tale. It isn't worth doing. I post this here because it's only rarely that a writer's work makes me want to throw the book at the wall. Bernard, alas, is the 2011 winner in this category.

* * *
Only an American could have written the bleak and stoic masterpiece that is The Human Stain. A daring and brilliant book, difficult to put down, there is yet something deeply untrue in it, impossible, something that never ceases to irk one as one reads. I think it's this: All Roth's characters are believable as people--all, that is, except for his protagonist Coleman Silk. Though he's built up biographically, step by step, one finally doesn't really believe Silk is possible. He's a character too mythically American to be quite real. Silk's Americanism, if we might call it that, finally makes him a monster--which may very well be the essence of Roth's art here: to have proven that the American myth of the self-made man, if pushed to its limit, becomes either hollow or monstrous. Or: To the extent we are truly individuals, we can only be examples of a foolish hubris.

I read The Human Stain with few preconceptions, as I don't know Roth's poetics. I haven't been moved to read much of Roth, so I've little background telling me what he might intend. This is probably a good thing: I can read this relatively late book without reading it as either an installment in an ongoing literary project, or as part of a developing lifelong thesis on America.

I will continue with American Pastoral and The Plot Against America.
Posted by Eric Mader at 2:17 PM 1 comment: 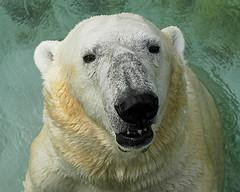 O polar bear, how you have fallen! On a barren shore, all slush and mud, you bellow your rage at an empty sea.

Your ancestors were sleek white Hunters, their ears could trace a seal's heartbeat through the ice.

Their angry bones peek from melting drifts; they frown at your ragged fur.

Like a bathroom mat too tattered to wash, we'll toss you out with the old newspapers, o Once-Great Hunter!

The seals rejoice at your demise, for they are in the San Diego Zoo.

Who will clean your yellowed fur? Your pristine coat has ring around the collar; it's clear you've been scrounging in the dump again.

Don't you know the science is dodgy? Do you even know what dodgy means?

Your world melts slowly like a bar of Ivory soap; your pups are born hermaphrodite.

You'll have to be sharper than that if you want to make it in this Economy.

You lanky hungered dog, I see your ribcage!

Have you no shame? To show yourself in Public like that?

The Discovery cameras are rolling! Hide behind that outhouse, Bear!

"Drill, baby, drill!" the shiny faces cry as you begin to eat your kind.

Don't turn cannibal yet, o Hunter, for I have a Plan.

We gather up those who say it's so; we gather their Ringleaders first.

We give them placards to their liking: "Global Warming = Liberal Hoax!" "Save the SUV!" "God Hates Tree-Huggers!"--real red-blooded American placards, not the kind those OWS commies wave.

We send them on a special "protest cruise" straight to your muddy shore. They'll take their complaints right to you, o Bear!

Rush and O'Reilly and Sarah and Glenn, with a clutch of their blubbery friends. We'll give them bullhorns and necklaces of sausage links.

Listen to them as long as you like. I think you'll know what to do.

Would you like Tony Hayward along? Cheney? Would you care for Champagne, compliments of Goldman Sachs, execs of which will soon be sent your way?

They have their gripes too, you know.

When you've had your fill of their arguments and whatever else, o Hunter--when, in short, there's some flesh on your scrawny limbs--then we will get down to Business for real.

Then we'll do something about your melting world. 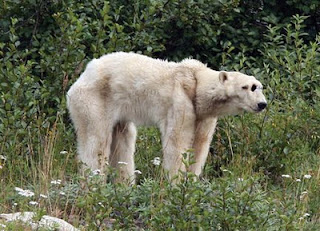 2007 photo of a starving polar bear, by Heiko Wittenborn.
Posted by Eric Mader at 12:11 PM No comments:

Anyone who sees me day to day can attest to the fact that I don't know much about fashion. I'm pretty indifferent when it comes to choosing clothes, usually opting for black jeans, black shoes, and a black teeshirt with a shirt over it in some color approaching, well, black. But even given my limited interest in fashion, there are some things I can see clearly. And here's one of them: Polo shirts are ugly.

Why in hell, I wonder, would anyone ever wear a polo shirt?

If you're a woman, a polo shirt will just make you look ditsy and dull. It doesn't matter what color you choose or what you match it with. A polo shirt, even in bright yellow, makes you look boring and boxy and half-informed. So why would you ever buy such a thing? Beats me.

And if you're a man? Here things are even clearer. At the very best, a polo shirt will make you look like a nerd. Don't believe me? Take any given nerd and look in his closet. Half his shirt wardrobe will be polo shirts or your money back guaranteed. 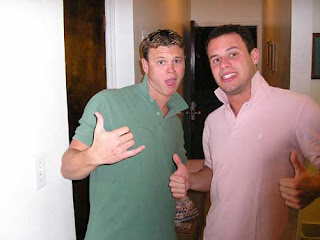 Think about it. When a Hollywood director has to portray a geeky suburbanite or some loser trying to pick up a woman in a bar, he will almost always put the actor in a polo shirt. Why is that? Simple. It's because guys like this, in real life, usually wear polo shirts. Directors know this, and audiences know it too. (Well, at least those not in polo shirts know it.)

So do you really want to look like a geeky suburbanite? No? Then why would you ever put on a polo shirt?

If a polo shirt doesn't make you look like a nerd, it will almost certainly make you look like a total dick. This is the other kind of guy who wears polo shirts. He wears them because he wants people to know he's in a yacht club or a has a pricey membership in a golf club. He either wants people to know this or to think it. Truth is maybe the guy isn't in either sort of club. Maybe he can't afford the membership. But does it really matter? Guys who join pricey golf clubs and guys who dream of joining pricey golf clubs both have pretty much the same personality. They are dicks.

If you are a man who often wears polo shirts but still aren't convinced they make you look like a dick, there's one way you can be sure: wear your polo shirt with the collar up. This will cinch the deal. Other than wearing a Nazi uniform, there's really no better way, through mere clothing alone, to make most people who see you immediately want to break your nose. A man in a polo shirt with the collar up is screaming out "I AM A TOTAL DICK" to anyone who sees him. 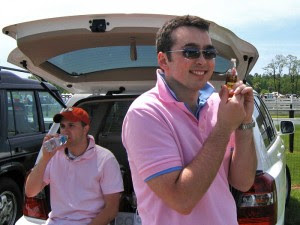 Still doubt that polo shirts are all that bad? Then try a little experiment. Take the first very cool person that comes to mind and try to find a photo of him online wearing a polo shirt. Go ahead. I'll give you a few minutes.

So you're back. You say you did try the experiment and you did find photos of a cool person in a polo shirt. Well, that's because you probably chose someone like Pierce Brosnan. Obviously there's something seriously defective in your notion of cool. Maybe you have more general problems you to work on before you even bother thinking about your wardrobe. Maybe there are more fundamental issues that to be addressed.

Okay, I know, I know. You googled "Obama" and found pictures of him in a polo shirt. But did you find any such pictures from before he got in the White House? You didn't, did you? That's because something happened to Obama, something kind of mysterious. Not only has he started wearing polo shirts, he's done all sorts . . . . But I don't want to get into it here. The point is: the Obama example doesn't count. Because sometimes people who aren't fundamentally dicks, who aren't dickheads in essence, can end up doing seriously dick-like things. Or maybe it's that they change slowly, or not so slowly, from being cool into being, well, total dicks. Hard to say. 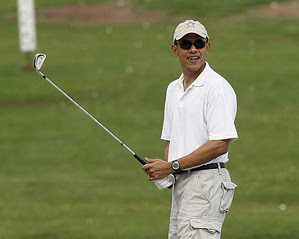 Barack Obama, Sell-Out in Chief.
Back to my main point. And it's this: There's good reason guys like Tiger Woods almost only wear polo shirts. There are two good reasons in fact:

For me these two reasons tend to fold into one and the same reason. But this is ultimately a deep philosophical truth about golf that is too complex and abstruse for me to get into here. I'll leave it for another time. Let me just, for the record, add two more reasons Tiger Woods deserves to wear polo shirts: 1) the name "Tiger" is the most dickish name I've ever heard; 2) Tiger Woods has terrible taste in women.

In conclusion-- Why in hell did you ever buy those polo shirts? And why don't you just make dishrags out of them like they deserve? I leave you with this: 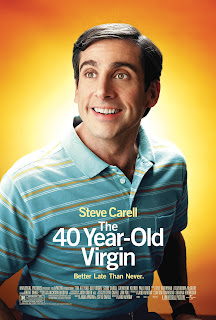 UPDATE 2016: "Popped collars"? No. I've finally realized the precise term for it. It hit me last week while listening to a guy in a cafe with collars up on his orange polo bragging about his business acumen: 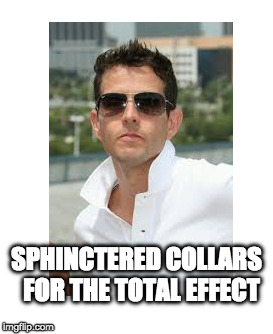 Check out my recent book Idiocy, Ltd. and begin the long, hard reckoning.