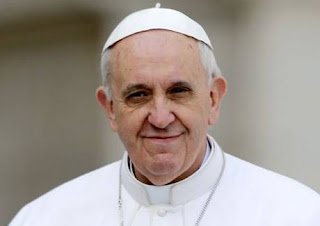 In a surprise to Vatican watchers, Pope Francis today alluded to an American pop star when he said that God loves all people, "even Miley Cyrus." The Pope, leader of the world's 1.2 billion Catholics, made his remark during Tuesday's homily.

A Vatican spokesman later in the day clarified the Pope's remark, insisting that it should not be interpreted to mean the Pope appreciated Miss Cyrus's VMA performance of August 25th, but that the Catholic Pontiff was simply stating a Catholic teaching.

"The Holy Father meant to stress that God's love was unconditional and available to all," Vatican spokesman Rev. Thomas Rosica said. "If Miley Cyrus can stop twerking long enough to get her wits about her, and if she can put her tongue back in her face where it belongs, then yes, God's love will be there for her too."

Posted by Eric Mader at 5:41 PM No comments: