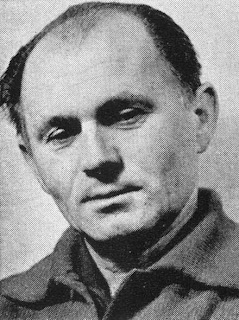 It may be common for a reader to experience the protagonist of the novel he is reading as a kind of refracted version of him- or herself. But this doesn't often happen to me. Nonetheless, it is precisely the feeling I get, strong to the point of uncanny, in reading Bohumil Hrabal's 1977 novel Too Loud a Solitude. It's not that his narrator's life story really matches mine. Rather, it's something more direct. I come a hair's breadth from feeling that this narrator is me. I am Hanta--seated on the other side of a tarnished mirror.

There's something naive about such an assertion, I know. Flaubert may have said, "Emma Bovary, c'est moi," but Flaubert was the writer who brought Emma forth, giving birth, if we're to follow the logic, to himself. But me, I'm not the Czech novelist Hrabal--as writer, I'm a flea in comparison to him--yet his character Hanta is precisely me muddling forward in somewhat different circumstances. Hrabal's tale has grabbed me where I live: not far from the basement, regardless of the floor I may be on.

Willingly I acknowledge, with Hanta, who spends his days compacting wastepaper and proscribed books in a Prague cellar, that I've a subterranean imagination, which doesn't mean I dream only chthonic dreams, but that I dream best when there is stone or clay or soil around me. This link to earth has been defined as typically Capricorn: mining, archeology, alchemy, grave-digging, grave-robbing--all are Capricorn pursuits, and my birth fell mid-January.

But in his spare and beautiful novel, moving with such a light touch, Hrabal has linked the tactile and terrestrial things I so cling to with that other thing I love: books, especially those on the verge of disappearing through the neglect of modern societies. Hrabal's society, the one he satirized, was Leninist communism; mine would be Facebook-era capitalism. Still, for old books the results in both societies are similar: our most precious insights, preserved in our cultures' written traditions, are silenced. Either they are censored and pulped, as in Hrabal's communist Prague, or they are effectively dead, as in my own screen-mediated US.

Manning his noisy compactor with its red and green buttons, a machine that allows him to watch the books and paper as they're crushed, Hanta discovers how to make artwork out of the "garbage". He not only rescues precious books from destruction, surreptitiously taking them home with him, but carefully arranges things in the compactor's drum so that the resultant bales will come out as he intends: each wrapped in Van Gogh's Sunflowers say; or, frequently, featuring German philosophical works opened to key passages. Hanta, we learn, is an avid reader of Kant, Hegel, Schopenhauer and Novalis.

Suddenly the door opened and in stomped a giant reeking of the river, and before anyone knew what was happening, he had grabbed a chair, smashed it in two, and chased the terrified customers into a corner. The three youngsters pressed against the wall like periwinkles in the rain, but at the very last moment, when the man had picked up half a chair in each hand and seemed ready for the kill, he burst into song, and after conducting himself in "Gray Dove, Where Have You Been?" he flung aside the halves of the chair, paid the waiter for the damage, and, turning to the still-shaking customers, said, "Gentlemen, I am the hangman's assistant," whereupon he left, pensive and miserable. Perhaps he was the one who, last year at the Holesovice slaughterhouse, put a knife to my neck, shoved me into a corner, took out a slip of paper, and read me a poem celebrating the beauties of the countryside at Ricany, then apologized, saying he hadn't found any other way of getting people to listen to his verse.

Kundera, at some point, praised Hrabal as his country's best writer. I've ordered two more of Hrabal's novels, though I don't expect to be struck so hard as I've been by this beautiful long prose poem. Hanta grabs my ear like no narrator I've read in recent years. I will look up this book's translator too, Michael Henry Heim, who has given Hrabal's novel in a stark and sinewy prose to be envied. Too Loud a Solitude is a great find.
Posted by Eric Mader at 9:38 AM No comments:

I've just finished the first chapter of Rowan Williams' book on Dostoevsky. I'm elated with the vigor of Williams' writing. He cuts right to the bone, tracing out a theological-critical approach that promises to show more of what drove the great novelist than any previous critic, including Bakhtin. I can see Williams is building on Bakhtin in a more direct and existential way. A quote on the Enlightenment sense of truth Dostoevsky refused to settle for:

To settle for "the truth" in the sense of that ensemble of finished propositions we can securely defend is one of the ways of removing ourselves from the narrative continuum of our lives; to opt for Christ in the face of this is to accept that we shall not arrive within history at a stage where there are no choices and no commitments to be made. The truth of defensible propositions, a truth demanding assent as if belief were caused by facts, generates a diminished view of what is human; it educates us in ignoring aspects of human narrative that we disapprove of or find impenetrable. Meaning comes by the exercise of freedom--but not any sort of exercise of freedom. By taking the step of loving attention in the mundane requirements of life together, something is disclosed. But that step is itself enabled by a prior disclosure, the presence of gratuity in and behind the phenomena of the world: of some unconditional love. The narrative of Christ sets that before us, and the concrete historical reality of Christ is what has communicated to human nature a capacity for reflecting or echoing love.

Williams is keenly aware that Enlightenment truth--or "scientific," factual truth about human beings--once it is accepted as definitive or cutting edge, tends to lead eventually to the violent purging of that which does not fit the theory. The last century amply demonstrated this potential in an overvalued or wrongly valued science, whether we look at Leninist communism or fascism. What Williams shows is how Dostoevsky developed a narrative strategy that subverts this even as it puts in narrative action the struggle of faith--a struggle that, by definition, is never finished.

The book is Dostoevsky: Language, Faith, and Fiction.
Posted by Eric Mader at 5:03 PM No comments: