You really need to read The Bleeding Edge, Thomas Pynchon’s latest. Especially if you’ve ever been a devotee of the writer in years past. You need to get your hands on a copy and start in right away.

This time the American master of paranoid inklings focuses his kaleidoscopic vision on New York in the months before and after September 2001, offering up a portrait of our 21st-century selves that is by turns rollicking, poignant, bleak. Bleeding Edge is both a great New York City novel and a far-reaching meditation on the attacks and what they’ve done to us. 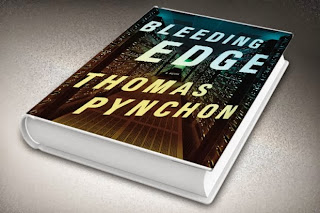 Pynchon’s narrative follows disbarred fraud investigator Maxine Tarnow as she struggles to make sense of the financial shenanigans of a handful of Internet startups. The question nags: Are the shoddily disguised money transfers made to the Middle East in recent months by net guru Gabriel Ice in any way linked to the attacks? In the wreckage left by the dot-com bust, Ice is breaking up and buying damaged firms left and right, adding his recently acquired properties to a nascent net empire whose purposes are largely hidden. The money transfers, the secrecy, the unexplained need for Arabic speakers in Ice’s organization--it all begins to prod the otherwise levelheaded Maxine toward grim suspicions, which only deepen with the murder of one of the peripheral players.

Spy thriller, whodunnit, comedy of manners--the genre of this novel is hard to pin down. Thematically speaking, one might do worse than focus on the recently hot topic of the value, positive or negative, of irony in American culture. Following the attacks, as Maxine herself points out, conservatives argued the country had somehow been vulnerable to such large-scale evil because of our "wallowing in postmodern irony"--a cultural state, according to wingnut pundits, that made us unprepared to deal with real evil in the world. To go by the cast of characters in Bleeding Edge, Pynchon, unsurprisingly, is having none of it. Rather, it is the literal-minded among us, those who are too confident in their rightness, that bring about our worst disasters.

Irony always suggests distance, whether it be the distance between what we say and what we mean (verbal irony), the distance between our intentions and a contrary result (situational irony), or distance felt when a reader or an audience member is aware of an outcome characters don't foresee (dramatic irony). This last, of course, is everywhere felt in The Bleeding Edge. As we read, we know the disaster coming on September 11th; Pynchon's characters do not.

Of course ironies of all sorts are crucial to Pynchon’s vision, and the dramatic kind doesn't by any means upstage the usual brilliant array he employs. This is testimony to his art. As ironic trickster, Pynchon has only gotten more wily with years.

Maxine’s revulsion/infatuation for right-wing fixer Windust is ironic, as is the fatal tension between cyberspace and meatspace made so much of here. Also sadly ironic is the way the vaunted freedom of cyberspace will, as Maxine’s father Ernie presciently suggests, lead to a world without freedom, a world where one’s every contact and purchase and movement is monitored, the world we now find ourselves in. In the novel such situational irony reaches its peak when the deep-Web territory DeepArcher is finally invaded and colonized thanks to the drop in randomness in the numbers chain generated by the Princeton Global Consciousness Project, that randomness itself having been compromised by the collective human reaction to the 9/11 attacks. Upshot? The attackers, whoever they are, end up winning on both fronts.

Yes, I’m aware these last sentences can only be nonsense to anyone who hasn’t read the book. I don't want to suggest by them that this book is especially arcane or hard to follow if you aren’t a Web programmer or philosopher. It's true that readers with some knowledge of Internet programming and Web history will doubtless get the most kicks out of the book. But if little old me could tag along through Pynchon's few tech-heavy pages, knowing there were jokes I was missing but still generally keeping up, then anyone who’s read some tech press or kept a blog should be able to manage.

Besides, The Bleeding Edge isn’t just about the Internet and political paranoia. It’s also about adultery, parenting, ethnic squabbling, evil and redemption. And the ever-winking presence of pop culture in the narrative is a Pynchon trademark, this time becoming a hilarious writerly tic. Rather than allusions to Rilke, we get riffs on Journey lyrics, the Monica Lewinsky story, The Brady Bunch, and, of course, The Simpsons. How this book will ever go over in Hungarian or Chinese I can’t imagine. Though the existential questions are deep and global, the cheery detritus of Americana bobs everywhere on the surface.

The Bleeding Edge is infused with a strong lyricism that most would find a hard match for the pop-cultural antics. But Pynchon pulls it off. Light and darkness--city light at various hours of the day or the charged darkness one gazes into at the borders of cyberspace--are especially well served. If you finish the book, go back and reread its first and last pages. Pynchon has framed his one-year narrative with musings on morning light and the overnight blooming of pear trees outside his heroine’s front door.

The writer is now in his mid-seventies. That he writes so well about youth, the Internet boom, hip hop culture and computer games is itself a wonder. Pynchon is seemingly too curious a traveler not to get into everything at once.

A couple early reviewers have doubted that The Bleeding Edge can stand with Pynchon’s major works, one critic comparing it to his relatively flimsy 1990 novel Vineland. I beg to differ. In Bleeding Edge we have one of America’s great writers writing in top form about the defining event of our new millennium. It is not to be missed.

Check out The Bleeding Edge at Amazon.com.
Posted by Eric Mader at 1:05 PM No comments: 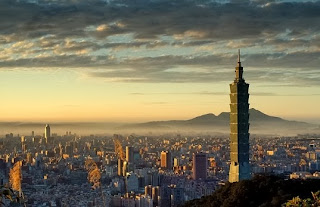 All empires rise and fall. With very few exceptions, the great architectural monuments civilizations erect end up as ruins. The Egyptians, Romans, Maya, Greeks--most of their greatest constructions are now rubble. Why?

I discussed this problem with my teenage students in Taipei. Most of them agreed with me that the ancient Romans, when looking at their glorious city, could hardly imagine that one day it would nearly all be gone. Cultures build great monuments and imagine that they will last.

I then asked them to consider their own city’s towering monument to cultural pride, Taipei 101. Though Taiwan is not a large country, for several years this building, completed in 2004, was the world’s tallest, finally being outdone by the Burj Khalifa in Dubai. Still, impressive as Taipei 101 looks now, what will it look like in a century, in five centuries, in five millennia? Will it still be standing? What, if anything, could cause such a massive building to become a ruin?

My students had fifteen minutes of class time to write short essays on the question. What I got showed me much about how Taiwanese teenagers understand the future. I post the pithier essays here. I’ve made slight grammatical corrections, but changed nothing of the content.

I think there are two possibilities that might cause Taipei 101 to be ruined. First, everyone knows the economy is going down year to year. And the rate for Taipei 101 space may become more and more expensive. Maybe thirty or forty years later, nobody can rent the place to be office or restaurants.

Second, global warming is more and more serious. The climate in different places is becoming strange. Maybe one-hundred years later Taiwan will be too hot for people to live and everyone will need to move to the north.

There will be no people living in Taiwan, so Taipei 101 will be a ruin.

Taipei 101 is the tallest building in Taiwan. Because of its height, it may collapse easier than other buildings. Taiwan is a country that has many earthquakes every year, so I think it will happen in two-hundred years.

Sinking into the water is another possible way to make Taipei 101 a ruin. The water level of the ocean is getting higher and higher because the Arctic ice is melting. Maybe just like the move The Day after Tomorrow, the whole city will be underwater, and Taipei 101 will become an ice tower in the center of Taipei. It will probably happen in five-hundred years.

Taipei 101 is a symbol for Taiwanese. It means we are strong enough even though our land is pretty small.

I think America will hit Taipei 101, because their economy relies on China now. America knows China always wants to control us. If they destroyed our 101, we would lose our confidence. And there would be only one China in this world.

They would destroy it after fifty years, and China’s industries will become higher quality to help America.

History shows that all great buildings eventually become ruins. This will likely happen to Taipei 101 too.

Maybe it’ll be under-sea in about the 22nd century. Because of global warming, the ocean water will become more and more, and at last the water will cover everything. It’ll be like an “Under-sea tour spot” if humans are still living.

Maybe it’ll amaze the world in a different way at around 2150. All the buildings in the world will become taller and taller in the future--100 floors, 200 floors, 300 floors, even even 1,000 floors. Taipei 101 will become the shortest building in the world. People will be amazed by that.

There are many kinds of possibilities in the future, but no one can know what will happen at last.

I think in twenty years it will still be there, but after about five-hundred years it may not be so popular because there will be more constructions better than it. Maybe in 1,000 years it will become completely ruins because there won’t be any creatures on the earth except cockroaches.

History shows us that all great buildings eventually become ruins. This will likely happen to Taipei 101 too.

Or maybe in 2113 there will be the third World War, and many of Taiwan’s people will go to fight, and Taipei 101 will become a ruin, because no one will buy things there.