Obama Admits He Is Not A Natural Born Citizen!!!

Please read this before it is pulled off the internet!!!

Obama admist he was born in Kenya and is a Muslim. If it were Bush, we would have udder chaos! Why are we NOT dragging him out of the Whitehouse???

Is this evidence enough?

Maybe the "Birthers" are on to something.

THE AMAZING PART OF THIS TRAVESTY IS AMERICANS CONTINUE ALLOWING THEMSELVES TO BE RULED BY AN ILLEGAL ALIEN.

Watch it before it’s pulled!

Thanks for sending this. My connection here is slow, so I'll watch it when I get a chance on the computer at the office. Of course Obama was born in Hawaii.

What I like about this email forward is how it follows the usual red state spelling rules. Note that it says "If it were Bush, we would have udder chaos!" An udder is a part of a cow. I don't know if you've noticed, but there's a red state tendency to use farm terminology when something else is meant. One email talked about the Clintons in the White House and their "fowl language." Fowl language means bird language. The words wanted are "utter" (not udder) and "foul" (not fowl). This is part of the fun of reading all these Fwds!

I also remember reading one about all the "bazaar people" Obama has given positions to. I suppose we are meant to understand that the president has promoted Turkish carpet salesmen to high positions.

And in this Fwd there's the usual advice to watch the video soon--"before it's pulled!" As if our administration is regularly trolling through youtube.com and deleting things it doesn't like. 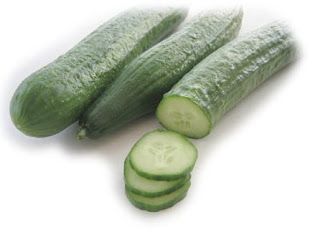 Cucumbers are the best vegetable source of the mineral niacin, which helps maintain brain power as we age.

Women who lie back with a slice of cucumber on each eye are not being foolish. Studies have shown that this simple cucumber treatment does more to fight wrinkles than most top-line eye creams.

Peeled raw cucumber with a bit of baking soda cleans chrome surfaces better than most polishes.

A pea-shaped chunk of raw cucumber held in the navel with a bandaid has been found to prevent pregnancy in blond women.

Adding a couple of slices of cucumber to your gas tank at the start of each month can decrease wear on pistons and improve gas mileage by as much as 3 percent.

Cucumber juice rubbed on the face and body before sunrise can make one invisible to video surveillance cameras until early afternoon.

U.S. President Ronald Reagan did all his presidential debates with a cucumber in his pocket for good luck. He wouldn't go on stage without it.

Unpeeled cucumbers can freshen the air in closets and cabinets. Replace every couple months.

Have a job interview? Going with a cucumber up your ass can make you appear more alert and on top of things and increase your chance of getting hired by up to 40 percent.

*Information not provided by American Association of Cucumber Growers.

Posted by Eric Mader at 3:29 PM No comments: 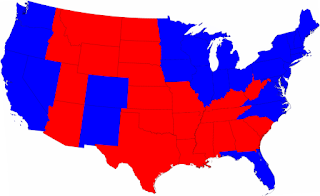 Hawaii will go blue, but don't worry, Sarah, Alaska is securely on the FREEDOMLAND side.

Perhaps not since the Civil War has the U.S. been as politically polarized as it is now. To listen to folks on the Right, Republicans and Democrats have radically different visions of what the country should be, and the pundits are generally in agreement about only one thing: common political ground is shrinking by the month.

The Republican Right, inching ever further rightward since the 1980s, has been driven nearly insane by the election of Barack Obama. The Tea Partyers are furious, first of all, that Obama's victory was even possible in their America. But more than this, they're angry that the new president--the cheek of it!--has actually dared enact legislation not in sync with their agenda. Such legislation must be un-American because, according to Tea Party logic, they themselves innately embody America. Energized by a media machine whipping them to a frenzy 24/7 the new American Right is not going to give up its strident platform any time soon. 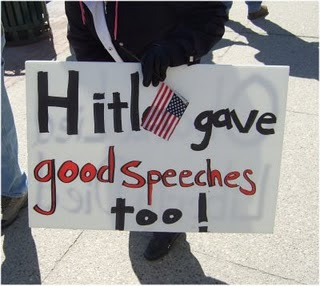 The Left, meanwhile, can hardly believe there's anything serious in people who compare Obama to dictators like Stalin or Hitler. For the Left, the new American Right has gone from somewhat looney and ill-informed to full-throttle bat-shit crazy.

But the red-staters' comparisons to Stalin and Hitler are indeed serious. These people, whatever they know or don't know about modern history, believe what they're saying. And it does seem the case, finally, that there are TWO Americas out there, neither of which is likely to give up its vision.

How can we resolve this conflict of ideology which, it is obvious, only gets more bitter by the month?

I call on the Obama Administration and its supporters in Congress to quickly adopt legislation that would give red state America what it wants. I'm proposing a radical transformation of the country, but one that would, if followed, allow an amicable end to the culture wars. There are two stages to my proposal:

Cut the tax rate for red state Americans to ZERO. Yes, ZERO taxes. Taxes are clearly their number one gripe and it is finally all too obvious that millions of Americans think paying taxes is unpatriotic.

According to my plan, red state Americans will no longer have to pay ANY of their hard-earned money to the inefficient, parasitic government in Washington. Along with paying no taxes, they will finally be freed from government intervention in their lives. Because along with my proposed radical tax cut, I propose that inefficient socialistic services no longer be imposed on red state Americans against their will.

Yes, there will be no socialistic public school system telling their children how or what to read. In particular, modern biology will no longer be shoved down their throats, and anything individual red state communities deem is science will henceforth be taught as such. Each school district, if not each mother and father, will have the freedom to decide what is considered science in the classroom.

But also: there will be no socialistically maintained road system and none of those state-funded socialistic flunkies called "police" enforcing the law with their government-paid cruisers. Just as red state Americans will be able to read or not read at their will, so they will be able to drive any speed they want on or off roads anywhere they want. The roads will finally be as they were meant to be: free thoroughfares through a free country.

In red state regions there will be no more government agencies enforcing food or drug safety, which, let's face it, is simply a drag on what would otherwise be vibrant sectors of the economy. The prices of drugs, no longer needing FDA approval, would surely go down, and the number of new medicines that would hit the market . . . in fact it's almost staggering to imagine. No more corrupt federal government saying what can or can't be sold as food or medicine. No more annoying ingredients labels to read. (If folks can even read because, remember, there will be no more socialistic elementary schools.)

There will also be no more government agencies enforcing unconstitutional limitations on firearms. This will be a big step forward for freedom. Red state Americans will finally be able to shoot or not shoot others whenever they want with whatever firearm they deem appropriate to their defense in each instance. 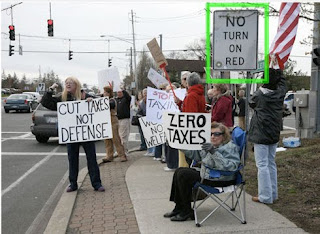 These are just a few of the elements of my proposed New Declaration of Red State Independence. But remember: the key to all of this sudden freedom is quite simple: CUT THE RED STATE TAX RATES TO WHAT THEY SHOULD BE! Freedom can only flourish as a result.

Just imagine it, you Tea Partyers--ZERO sales or income tax! Your red state economies will thrive with the sheer amount of Pure Freedom let loose in the market. No more licensing for food or drugs or weapons or anything. No more driver's licenses even. No more complicated regulations on what banks or investment gurus can do with your money. And the money you earn--you get to keep 100 PERCENT of it! Which is how it was meant to be in a democracy. There will be no more government leeching off you. I can hear the hollers and hoots of approval already. Yeeehawww!

But now we come to Stage Two. At first I thought there'd be no need for a Stage Two, but after modeling some likely results of my Stage One proposal I realize I was wrong. After Stage One has been implemented, several things seem likely to happen, viz.:

1) Red state Americans will enjoy such a MASSIVE AMOUNT of SHEER FREEDOM that they will no longer be SUITED for living in or even visiting the corrupt blue state regions.

2) The newly liberated red state economies will be THRIVING so much that the disparity in economic power between red and blue state regions will make it necessary to establish safe borders.

Because of these two factors, I came to understand that a further radical step was necessary.

In Stage Two, red state America will be forcibly "seceded" from blue state America. Yes, the U.S. will finally become two separate countries. I know many red-staters will be only too glad to be free once and for all from the corrupt liberals in Washington. And many blue-staters, though perhaps more sentimental, will come to see the need to let their newly FREE red-state brothers and sisters go their own way. 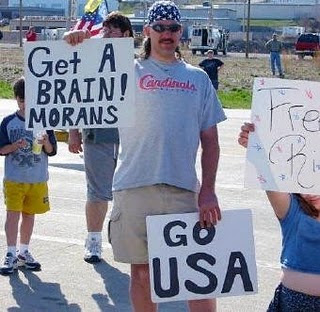 The two new countries will have to be renamed, I know. I recommend calling the red state regions simply FREEDOMLAND. As for the blue state side, a name will have to be decided democratically, i.e., in the old, slow and corrupt way.

Texans and Alaskans and others have long been talking about secession. My plan, I think, is the best way to effect a final and reasonable secession without civil war.

And so to sum up: I call on the Obama Administration to enact swift legislation leading to the TOTAL FREEDOM of our Tea Party and red state brothers and sisters from the corrupt system of democratic government they now suffer so grievously and totalitarianly under.

I chose this 4th of July, our national day of independence, to make my proposal for this new and secondary independence of red and blue folks from each other. Clearly it's time we went our own ways.
Posted by Eric Mader at 11:26 AM No comments: