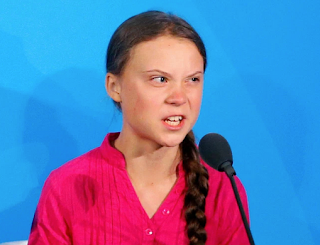 Guess this must be LIBERAL MEDIA FAIL #984,261. From an Australian site, regarding Greta Thunberg:

She doesn’t dress to attract men. She doesn’t charm or flirt or giggle or pout. She has a death stare. She is angry. She is here to say something, whether people want to hear it or not.

She’s challenging the power of middle-aged white men, and it upsets and threatens them. They’re used to giving their opinions and being listened to and being respected. They don’t quite understand where she’s appeared from and why she’s talking like she’s an equal, and they don’t like it.


Uh-huh. Where to start?

First, notice how this Australian journalist has projected her own insecurities and lame feminist persecution complex onto this 16-year-old girl. It’s pathetic. It’s laughable. I’d blush for her if I had any blushes left for these people. I don’t.

Second, as a middle-aged white man, allow me to point out a few things:

I don’t care and didn’t notice how this girl Greta dresses. Quite differently from left-liberals, I don’t really like to see sexualized, flirty teens. For me, hypersexed kids are symptomatic of a failing civilization. Left-liberals like this Aussie writer and her friends are “sex positive”, which means they want to teach 3rd-graders how to use condoms and sex toys. Not me.

2) “middle-aged white men … it upsets and threatens them.”

Huh? Rather than feeling threatened by this girl, I feel SORRY for her. If she is smart, and she may well be, when she grows up she'll likely resent how her attention-starved parents and the media have used her. Until then, I feel it is Greta, and the millions of poor kids fed the climate hysteria she’s been fed, that are under psychological threat.

3) “[middle-aged white men are] used to giving their opinions and being listened to and being respected.”

I don’t “give opinions”. Instead I make arguments. I leave “giving opinions” to liberal Aussie writers and people like the ladies who appear on The View--i.e. people who assume that when they open their mouth worthwhile ideas come out SIMPLY BECAUSE THEIR MOUTH IS MOVING.

4) “They don’t quite understand where she’s appeared from…”

Come again? We know exactly where Greta has appeared from and why a microphone has been propped in front of her. We know and we are not mystified and we are not especially impressed.

5)—AND THIS ONE IS KEY— “They don’t understand … why she’s talking like she’s an equal.”

Sorry, but no 16-year-old can talk as an equal to educated adults. That this Aussie opinionator believe Greta is somehow an intellectual equal to adults only proves she herself has never grown up. If my own 16-year-old self were to appear from the past and begin lecturing me, now 53, I would rightly tell my 16-year-old self to take a hike. I’d say: “Listen. If you study hard, when you’re 22 you MIGHT have some interesting ideas. But even those ideas, by age 35 you’ll have dropped most of them. Unless you’re a nitwit. As for now, keep studying. You’re in no position to lecture your elders. There’s just far too much you don’t yet understand. Oh, and take out the garbage.”

I’d say this same thing to a boy or girl, black or white or Latino or Asian.

When is this plague of liberal blather going to end? What kind of moron publishes dreck like the above-quoted editorial?

Her name is Helen Vnuk. She’s a contributor on “News and Parenting”, of all things, for the Australian journal MamaMia. For shame.