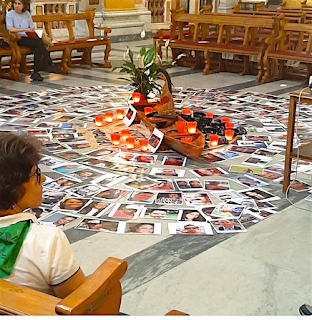 Saturday afternoon, Oct. 26, 2019, the final day of the "Amazon Synod". The Pachamama idol surrounded by candles in the middle of Traspontina Church near the Vatican.

Fall finally arrives in Taipei. I wake up as if from a long fever.

Face it. Clowns have been getting a bad rap for a while. But with two installments of IT on the racks, and now Joker, it's pretty much game over for the clown as a dopey fellow who's fun to have at your kid's birthday party.

Are you listening, McDonald's?

A fashionable young woman stands next to me on the subway. I didn’t notice that five or six strands of her long black hair were caught in the strap of my shoulder bag, and as I’d stepped a few inches away from her, I began pulling her hair with the strap. But here’s the thing: She is mesmerized by her cell phone, and feeling her hair pulled, doesn’t even look to see who, or why, but merely leans her head toward the pull, eyes still glued on the tiny screen.

I stood a moment taking it in. She only turned to look when I began to untangle her hair from my bag. It was my stop.

I am not good enough to be a Catholic, and neither is the pope. The way we each lack the necessary goodness differs. My lack is the usual badness—sloth combined with selfishness; an undeveloped prayer life; fits of anger, etc. I do however believe Catholic teaching is true. As for this pope, it gets harder and harder to believe he believes.

As a child, for some reason, I got in the habit of writing most of the numerals from the bottom up. My teachers never corrected me, so I continued. I've now been writing numbers this way for nearly half a century. Sometimes people notice."Hey! What--? ... Write that again!"

This year I finally began writing the number 8 from the top down. But I persist in writing 2, 3, and 5 from the bottom up. And will.

St. Paul writes in his letter to the Galatians: “Formerly, when you did not know God, you were enslaved to beings that by nature are not gods. Now, however, that you have come to know God, or rather to be known by God, how can you turn back again to the weak and beggarly elemental spirits? How can you want to be enslaved to them again?” (4:28)